About 0:18 local time of July 26th (22:18 of July 25th UT), SMART Project’s detectors registered a fireball over Mediterranean Sea. This event which could be observed from Calar Alto, La Sagra and Sevilla observatories, was also recorded by two of the Calar Alto Observatory surveillance webcams, and the luminous phenomena last nearly 9 seconds. 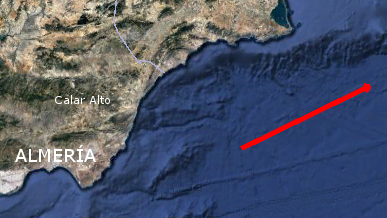 On the left image you can see the path over the sea this object followed. And on the top image, some of the emission spectrum lines can be appreciated.

Below are the videos recorded with both the SMART east detector and with the Calar Alto Observatory surveillance webcams.

Note: The bright light that can be observed at the end of the above video is a car coming.