Bright fireball over Cáceres and Toledo provinces on September 12th 2017 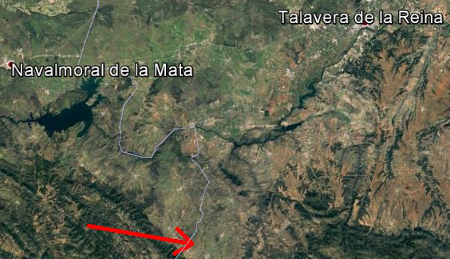 This bright fireball flew over Cáceres and Toledo provinces (south-center of Spain) at 3:35 local time (1:35 UT) of last September 12th. This object could be recorded from SMART Project's detectors operated at Calar Alto, La Hita, Sevilla and Huelva observatories. As well, the fireball could be registered with the Calar Alto Observatory west surveillance webcam.

Following Professor José María Madiedo (University of Huelva), the PI of the SMART Project, the fireball was caused by the entrance into the Earth atmosphere of a meteoroid detached from an asteroid. As the figure shows, the luminous phenomena started over Cáceres province at an altitude of about 84 km above the ground level and moved southeastward, finishing at about 31 km of altitude above Toledo province.

Below is the video that could be recorded with Calar Alto Observatory west surveillance webcam.