Fireball above the Mediterranean Sea on November 18th 2016 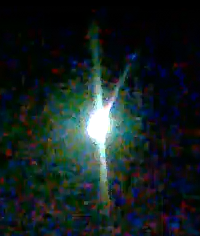 A fireball flew above the Mediterranean Sea last November 18th at 23:31 local time (22:31 UT). This object was registered by the SMART Project's fireball detection stations at Calar Alto (Almería) and La Sagra (Granada) observatories. The fireball was also followed by three webcams of the Calar Alto Surveillance System.

Following the analysis carried out by the PI of the SMART Project, Professor José María Madiedo (University of Huelva), this event occurred as a result of the impact on Earth's atmosphere of a meteorite at about 72.000 km/h.

The top image shows the path this fireball followed in front of Almería's coasts.