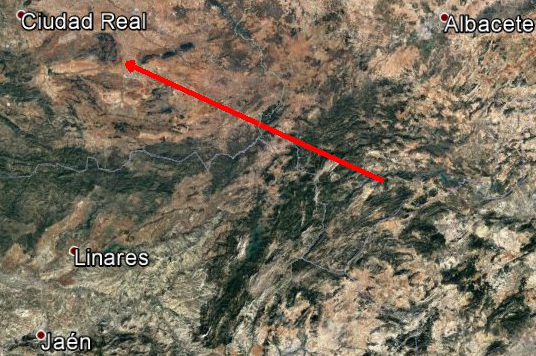 At 21:41 UT of last April 14th, a long fireball flew above Castilla La Mancha (Mid-South Spain). The object could be registered with the the SMART Project's detectors operated at the Observatories of Calar Alto (Almería), La Sagra (Granada), La Hita (Toledo) and Sevilla. This event could also be observed with one webcam of the Calar Alto Observatory surveillance system.

Following the preliminary analysis carried out by Professor José María Madiedo (University of Huelva), PI of the SMART Project, the fireball was caused by a rock with asteroidal origin that impacted against our atmosphere at an estimated speed of about 100.000 km/h. The fireball started at an altitude of about 98 Km above the province of Albacete. Then it moved northwestward finishing at an altitude of about 55 km, once it was above the province of Ciudad Real.

The videos below correspond with the SMART detector and the Surveillance System webcam, both located at the Calar Alto Observatory (Almería).