A bright fireball in broad daylight on July 9th 2018 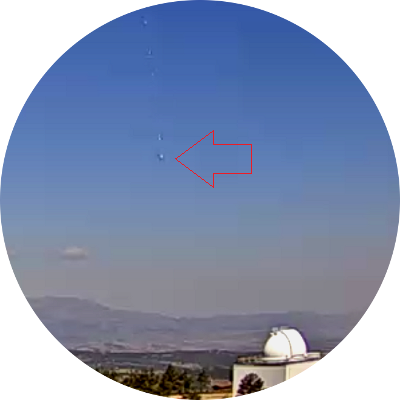 During the morning of July 9th 2018, at 10:19 UT (12:19 local time), in broad daylight, a bright fireball could be observed crossing the southwest skies of Iberian Peninsula, from the northeast part of Badajoz province and going up to Cáceres province, both into the Extremadura Autonomy.

Due to the fact that there were only a few records of this event, the analysis of the data is being very complicated.

However, and following what it could be deduced from the existent records, Professor José María Madiedo (University of Huelva), PI of the SMART Project, calculates that this firewall has been produced as consequence of the entrance into our atmosphere, at the approximate speed of about 173.000 km/h, of a detached rock from a comet, composed with little resistant material that was totally destroyed at a high altitude, so no meteorite was generated (no fragment of the object has arrived on earth).

The fireball, which started at an altitude of 97 km, has flew above the northeast part of Badajoz Province and them moved northwestward up to Plasencia, in Cáceres Province, finishing there at an altitude of about 70 km.

In the video registered with the Calar Alto Observatory west surveillance webcam (below), the fireball appears just at the left side of the right most telescope that can be seen on the image. It is difficult to see, as the sun light is intense and masks the object. You have to keep the attention to the thin fireball’s track.