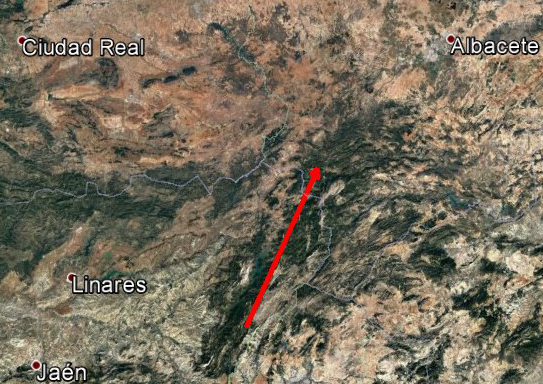 During the early morning of December 4th to 5th, three bright fireballs flew above Valladolid (Mid-North Spain), Granada, Jaen and Albacete (South-East Spain). Those fireballs could be registered with the SMART Project's detectors operated at La Hita (Toledo), Calar Alto (Almería), Sierran Nevada (Granada), La Sagra (Granada) and Sevilla observatories. This time, at Calar Alto Observatory (Almería) only the bright fireball above Jaen and Albacete provinces could be observed with both north SMART detector and surveillance webcam.

Following the analysis carried out by Professor José María Madiedo (University of Huelva), SMART Project's PI,  the images that could be registered at Calar Alto correspond with the last fireball, the one that started  at 4:41 local time (3:41 UT) above the Northeast of Jaen province and at an altitude of 113 km and finishing at 77 km of altitude once it was flying over Albacete province. Its estimated speed was of 150.000 km/h and the rock was detached from a comet.

The path above the ground this fireball followed is shown on the image.

The videos registered with both north cameras of SMART Project and surveillance webcams, located at Calar Alto Observatory are shown below.

The other fireballs that could be registered over Spain on the same night took place at Valladolid at 23:51 (local time) on December 4th at an initial altitude of 106 km finishing at an altitude of 76 km, and above Granada at 2:33 (local time), starting at 111 Km and finishing at 62 km. Both of them had also cometary origing and unfortunately none of those fireballs could be observed from Calar Alto Observatory.