The third in February, and the fourth in 2020. A new fireball could be registered with the SMART Project’s detectors operated at Calar Alto (Almería), La Sagra (Granada), La Hita (Toledo) and Seville observatories. 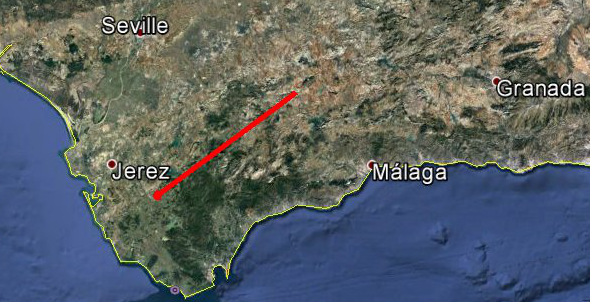 This nice object could also be registered with the west surveillance webcam at Calar Alto Observatory in Almería, more than 300 km away of this event.

And, again, this is the third that flew above West Andalusia’s skies.

Following  the preliminary analysis carried out by the PI of the SMART Project, Professor José María Madiedo (Instituto de Astrofísica de Andalucía IAA-CSIC), this fireball was produced by a detached rock from an asteroid. This object impacted against our atmosphere at a speed of about 145.000 km/h, moving from Northeast to Southwest, most of it above Cádiz province.

The image on the right shows the trajectory this fireball followeb above the ground.

Below are the videos that could be registered with the web SMART detector and the west surveillance webcam, both operated at Calar Alto Observatory in Almería.