Another fireball on May 31st 2020, now above Southeast Spain 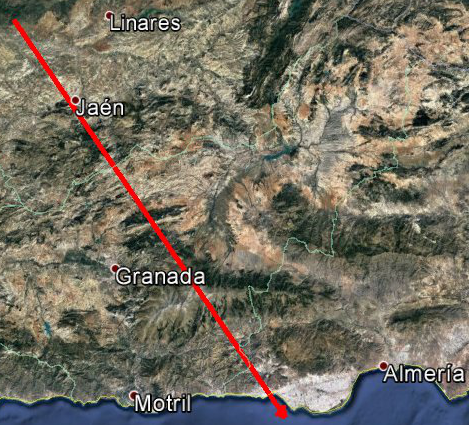 A new fireball has been registerd by the detectors that Project SMART operates at Calar Alto (Almería), La Sagra (Granada), Sierra Nevada (Granada) and Seville observatories.

As usual, Professor Madiedo (Instituto de Astronfísica de Andalucía IAA-CSIC) did the preliminary analysis. Following that, the event resulted as a detached rock from an asteroid which impacted against our atmosphere at a speed of about 100.000 km/h.

The luminous part of the event started at an altitude of 94 km at the west part of Jaen province. Then it moved southeastward, passing through the vertical of the city of Jaen, crossing Granada province in diagonal and finished at an estimated altitude of 57 km above the Mediterranean Sea in front of the most occidental part of Almería's coasts.

The image shows the long path this object followed above the ground.

And below is the video that the west SMART Project's detector could register from Calar Alto Observatory (Almería).