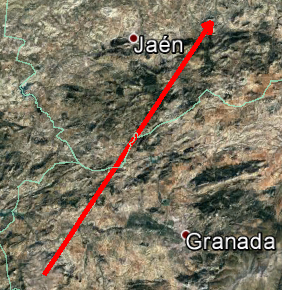 At 00:31 UT (02:31 local time) a very long and nice fireball flew above the skies of Granada and Jaén provinces (South Spain)

Following the analysis carried out by Professor José María Madiedo (Instituto de Astrofísica de Andalucía IAA-CSIC), SMART Project's PI,  this fireball was caused by a fragment detached from an asteroid which impacted against our atmosphere at a speed of about 57.000 km/h.

Below are the videos from the the surveillance webcam and the SMART detector, both operated at Calar Alto Observatory in Almería.