Fireball during night of August 5th 2017 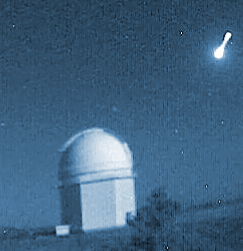 Following the analysis carried out by Professor José María Madiedo (University of Huelva), who is the PI of the SMART Project, this fireball was generated due to the impact against our atmosphere of a meteoroid detached from comet 169P/NEAT. The fireball started at an altitude of about 101 km above the sea level, and finished at about 74 km of altitude. When this object entered into the atmosphere, its speed was about 90.000 km/h.

Next figure shows the path over the sea this object followed:

And below are the videos recorded with the SMART Project’s detector and with two of the surveillance webcams, all of them placed at Calar Alto Observatory.