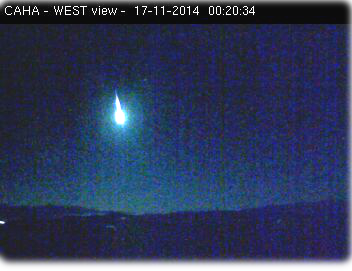 On November 17th2014, at 00:20:34 UT, a bright fireball takes to the skies of Southern Spain. This object was a Tauride, a fragment from Encke comet. The fireball with a magnitude of -10 flew over province of Malaga, starting at an altitude of 102 Km above the sea level and finishing around 48 Km altitude. Normally, Taurides do not delve into Earth atmosphere so much, although last year it was proved that some of the coment Encke detached fragments have a very high mechanical strength and that, under certain conditions, they even reach the ground as meterorites  (Madiedo et al., 2014, Icarus, Volume 231, p. 356-364). 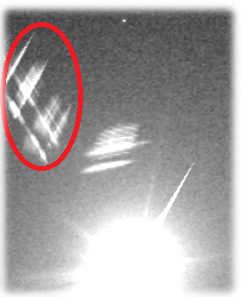 The image shows the projection of the path on the ground this bright fireball followed during its passage over the province of Malaga, in Southern Spain.

And, finally the two recorded videos we took. First one is the one from our external surveillance system. The camera that could observe this object was the webcam pointing to the West. The second video is the object seen with the fireball detection station.