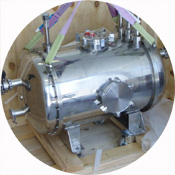 The assembly phase of CARMENES instrument has begun, with the arrival to the Astrophysical Institute of Andalusia (IAA), in Granada, of the preparation unit for the cooling system, a piece of hardware designed and built in collaboration with the European Southern Observatory (ESO) and with an outstanding participation of the Electronics Department of Calar Alto Observatory, which provides the monitoring and automatic control system (interlocks system) for the device.

The tank that will contain the infrared arm of the instrument will arrive to Granada next June, and it will remain at the Technology and Instrumentation Development Unit of IAA until the completion of its assembly and configuration, for its later installation at Calar Alto Observatory. 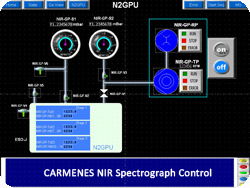 CARMENES is not only the first instrument proposed by Spain to be installed at the 3.5 m Zeiss reflecting telescope of Calar Alto Observatory but, also, it is an instrument unique in the world, both regarding precision and stability, two features required to measure the tiny velocity variations that planets induce on stars. In fact, CARMENES implies a stimulating technology challenge, because it will study stars placed at hundreds of trillions of kilometres looking for velocity changes of the order of one meter per second, i.e., the speed of a slow walk. 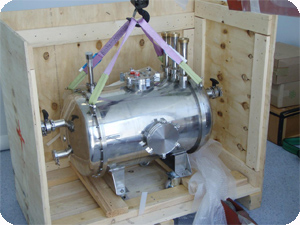 To reach such a precision, a careful optical design is required but, at the same time, extremely stable environmental conditions have to be secured during the operation of the instrument that, for this reason, will work in vacuum and at temperatures electronically controlled to one hundredth of a degree. The monitoring and control systems provided by the Electronics Department of Calar Alto play a key role here.

CARMENES will work at the Zeiss 3.5 m telescope of Calar Alto Observatory (Almería). It is a project developed by scientists and technologists of the Astrophysical Institute of Andalusia, in collaboration with other institutions from Spain and Germany.

Press note from the Astrophysical Institute of Andalusia (in Spanish)