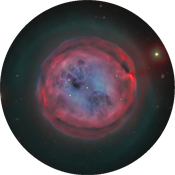 Stars similar to the Sun end their lives as white dwarfs. But, before becoming those dense stellar corpses, they expel their outer gaseous layers and they ornate the sky for some thousands of years with the most beautiful objects in the universe: planetary nebulae. M97, better known as Owl Nebula, belongs to this category. We present one of the best images ever obtained of this celestial wonder.

Owl Nebula was discovered in 1781 by Pierre Méchain, collaborator of Charles Messier, and it was incorporated into Messier's catalogue of diffuse objects with number 97. Although its surface brightness is quite low, it can be seen with amateur telescopes in dark nights. Large telescopes, or photographic techniques, are required in order to perceive the two cavities that justify its name. Only photographs reveal the surprising display of colours of M 97.

The planetary nebula M 97 is placed in the constellation of the Big Bear. It is very difficult to evaluate the distances to planetary nebulae and this case is not an exception. Thus, astronomical literature registers distances ranging from 1500 to 2500 light-years from Earth.

The central, dying star, is a small and hot object, around one hundred thousand centigrade degrees at the surface. The radiations from this white dwarf excite the atoms of the nebulous layers and make them shine. As other planetary nebulae, the shine of M 97 comes mainly from the emissions from ionized hydrogen and oxygen atoms, what gives these objects their dominant reddish and greenish hues. But this object has, also, a considerable portion of light from the white dwarf that has been reflected by nebular particles. This mechanism makes its color bluer, and distinguishes this from other planetaries with a smaller reflection component.

Most data in this image were obtained with the reflecting Zeiss telescope of 1.23 m at Calar Alto Observatory, in official time of the Andalusian Network for Technical and Scientific Public Outreach (RECTA), through an agreement with the Documentary School of Astrophotography (DSA). Some data come from the 2.2 m and 3.5 m telescopes placed at the same observatory. Images with different integration times were obtained with filters Strömgren b, H-beta, O-III, Strömgren y, and H-alpha, completing 300 minutes as a whole. The information from those filters was distributed among the three colour channels (blue B, green G, red R), as indicated in the attached figure. Strömgren data were used to compute the fluxes of continuum emission at wavelengths of 450, 550 and 650 nm. Also, each emission line was assigned a concrete colour hue. The image was processed by Vicent Peris, José Luis Lamadrid, Jack Harvey and Steve Mazlin with the program PixInsight.

The diversity of filters used allows to disentangle different contributions to the light emmited by the nebula. Some areas shine with reflected light, while others are dominated by hydrogen (H-alpha, H-beta) or oxygen (O-III) excitation, depending on the physical conditions at each area inside the object.

The final image covers 7.5 arcminutes on the sky (approx. one quarter of the size of the full Moon). Celestial North is up, celestial East is left.

This photograph is the first result of the collaboration of Calar Alto Observatory (CAHA) with the Andalusian Network for Technological and Scientific Public Outreach (RECTA) and with the Documentary School of Astrophotography (DSA). This effort will continue and it will produce many more images in the near future, all of them full of beauty and scientific content.

© Calar Alto Observatory, September 2009 This email address is being protected from spambots. You need JavaScript enabled to view it.