The most luminous quasar state ever observed 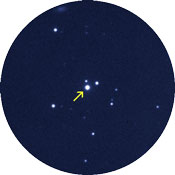 Calar Alto participates in a multi-observatory effort to study the most luminous quasar ever observed. The object, radio quasar 3C 454.3 in the constellation Pegasus, experienced during 2005 a strong optical outburst that made it observable even with amateur instrumentation (reaching R = 12 mag). According to the WEBT team, «this ourburst peak likely represents the most luminous quasar state ever observed.» The same team quantified the maximum luminosity of this object as MB = -31.4 mag. This means that, at its maximum and when observed in blue light, 3C 454.3 was as bright as 550 billions of suns put together. This is very bright even for a quasar, considering that this object reached an intrinsic brightness, in blue light, around one hundred times more intense than the well known quasar 3C 273. However, the apparent brightness of 3C 454.3 in visible light remained similar to that of 3C 273, due to its much larger distance: 3C 454.3 is located at 12 billions of light-years, while 3C 273 is five times closer ("only" 2.4 billions of light-years). If we were to express the distance to 3C 454.3 in everyday units, we would have to write (and read) the cumbersome number 114 000 000 000 000 000 000 000 km. At present, scientists do not exactly know what caused such an enormous brightening. This remains a mystery that follow-up observations, already planned by this team of astronomers, will help to solve.
"As typical for Blazars, this huge optical outburst came as a surprise but luckily we were able to organize a world-wide observing campaign on a very short notice with more than 20 observatories involved" said Jochen Heidt from the Landessternwarte Heidelberg, Germany and co-author of the paper presenting the results. "These outbursts are a unique possibility to study the processes which feed supermassive black holes and keep these monsters alive."
Quasars are the active nuclei of distant galaxies. In them, super-massive black holes engulf material from their surroundings, and huge quantities of energy are released in this process. 3C 454.3 is classified into the category of blazars, due to the characteristics of its emission. This outburst was followed by the team of the Whole Earth Blazar Telescope (WEBT; see Villata et al. (2006), A&A 453, 817-822 ), in the context of a multi-wavelenght, long-term effort in which several observatories around the world are coordinated to cover the spectrum from radio to high energies, including the optical band. Part of the observations were collected at Calar Alto Observatory.

The image above shows quasar 3C 454.4 in the Johnson B filter, marked by the arrow, and was obtained in June 2006 with the CAFOS instrument attached at the Cassegrain focus of Calar Alto 2.2m telescope by observatory staff (M. Alises, D. Galadí-Enríquez, S. Sánchez). North is up, East is left.
Full resolution image (0.3MB).
© Calar Alto Observatory, July 2006