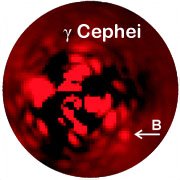 During the last decade, the discovery of planets around stars other than the Sun has revealed a variety of kinds of planets, orbits, and systems, often very different to our Solar System. One of the most interesting examples are those of stars accompanied not only by planets, but also by other stars, making double "Sun" sunsets, and sunrises, no longer science fiction. A research team from the University of Jena (Germany) has recently made interesting discoveries at Calar Alto by performing a systematic search for such systems.

Since the discovery in 1995 of the first extrasolar planet around a normal star (51 Pegasi), it has become evident that there exists an unexpected diversity of planetary systems, most of them very different to our Solar System. First, it was found that there are many massive planets placed extremely close to their parent stars: the so-called "hot Jupiters". This is very different from what we observe in the Solar System, where massive planets are located far away from the Sun, and this finding required a revision of the theories of planetary formation. Second, it was shown that the process of planetary formation is not restricted to single stars as our Sun: indeed, under certain circumstances, it is possible to form planets around binary stars, which are a much more dynamically complex environment than our own Solar System.

A binary star is a physical system formed by two stars circling around their common center of mass. There is a wide diversity of such couples, often formed by stars of similar mass, but there are also may examples of binary systems with components of very different masses. The Star and Planet Formation subgroup of the Astrophysical Institute of the University of Jena (AIU) has recently been looking hard into candidate systems that might allow the  existence of planets surrounding binary stars. Their search, carried out by Ralph Neuhäuser and Markus Mugrauer, makes use of the sharpest possible images of these stars and their immediate surroundings in order to identify faint neighbors (that could be potentially associated with the system). To get images of extreme sharpness it is necessary to compensate the blurring effect of the atmosphere (which make stars twinkle) and this can be achieved thanks to adaptive optics, or other techniques such as speckle imaging, both available at Calar Alto. The potential companions detected this way are later studied in detail to confirm their true physical association to the planet-hosting star, by discarding the possibility that they are simple chance alignments of unrelated objects at different distances.

One of their recent findings refers to a quite bright star, gamma Cephei (γ Cephei), a star with a planet (γ Cephei Ab) with a minimum mass 1.7 times that of planet Jupiter and with a period of around 3 years. From previous spectroscopic studies this star is known to also have a low-mass stellar companion (γ Cephei B) orbiting the brighter component. This team has now been able to get the first direct images of the secondary star which allow to significantly improve the determination of physical parameters of the γ Cephei system. The observations were obtained both with the Japanese telescope Subaru (placed at Mauna Kea, Hawaii), and with the instrument Omega-Cass attached to the 3.5 m telescope of Calar Alto (Spain). The observations at Mauna Kea were obtained by Misato Fukagawa (Nagoya University) in June 2006, and at Calar Alto by Markus Mugrauer and Tobias Schmidt (both AIU Jena) in September 2006.

The two stars in the γ Cephei system are separated by an average distance only 20 times the distance from the Earth to the Sun making this system one of the closest planet hosting binary systems presently known. It is composed of the central bright subgiant star γ Cephei A, which is more massive than our Sun (1.4 solar masses), the secondary star γ Cephei B which is smaller than half the mass of the Sun (0.4 solar masses) and a planetary companion, circling the primary star.


Now imagine a "Sun" and a failed "Sun" sunset 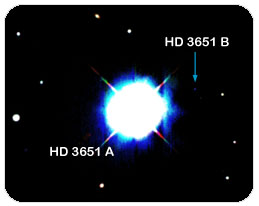 Another outstanding discovery by the same team using Calar Alto telescopes, is that of the companion to the star HD 3651. HD 3651 is a nearby faint, red star, known to have a sub-Saturn-mass planet. This team discovered that the very faint companion is in fact a cool brown dwarf, the first brown dwarf  directly imaged as companion to an exoplanet host star. Observations performed with the instrument Omega-Cass at the 3.5 m telescope of Calar Alto in September 2006, helped to demonstrate the link between HD 3651 and this small substellar object (now called HD 3651 B), and to determine its physical characteristics. The faint companion of the planet host star HD 3651 is one of the coolest brown dwarfs presently known (effective temperature ranging between 500o and 600o C).

The same research team has used several instruments and telescopes to find faint companions to planet host stars. In the course of their campaigns, they have found secondary objects with masses from 0.5 to 0.075 the mass of the Sun, in the substellar-stellar mass border. Two companions turned out to be white dwarf stars, an evolved kind of object whose existence in planet-harboring systems implies new restrictions to the theories that explain the formation of planets.

Science fiction needs to catch up!

Omega-Cass observations of gamma Cephei A+B (418 Kb) Infrared images of the gamma Cephei system obtained from Calar alto on September the 11th (left) and 12th (right) 2006. The bright, A component would be located at the center of both images, but it has been digitally subtracted to reveal the position of the faint, B component, marked with an arrow.

© Calar Alto Observatory, January 2007      This email address is being protected from spambots. You need JavaScript enabled to view it.