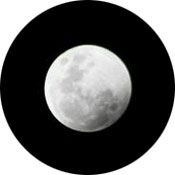 During the night from the 3rt to the 4th of March 2007, a total lunar eclipse was visible in excellent conditions from Europe and Africa. This impressive celestial phenomenon was followed and photographed from Calar Alto Observatory. A short movie was assembled with the images.

Lunar eclipses occur when the Moon, following its orbit around the Earth, enters the shadow that our planet casts into space. Under these conditions, the Moon's face gets dimmer, but it does not disappear completely, still visible with a reddish hue, due to sunlight scattered by the atmosphere of the Earth.

The eclipse was observed and photographed from Calar Alto by Jesús Aceituno and Santos Pedraz, using a Canon EOS400D digital camera equipped with a 300 mm zoom lens. A total of 122 images were obtained, at a rate of one every 2 minutes. These were later assembled to produce this short movie, where you can perceive not only the obscuration and reddish hue due to the Earth's shadow, but also the slow own displacement of the Moon against the background of stars.

The lunar eclipse of March 3rd-4th 2007 seen from Calar Alto (animated GIF, 734 Kb) Sequence composed from 122 images taken at a rate of one every 2 minutes with a digital camera Canon EOS 400D and a 300 mm zoom lens (Jesús Aceituno and Santos Pedraz).