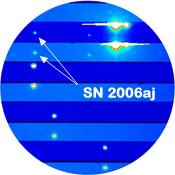 The most massive stars in the universe die in colossal explosions, supernovae, whose power makes them visible over huge intergalactic distances. But these explosions are much more complex than previously believed. Recent observations made at Calar Alto Observatory zoom in into one of the manifestations of this complexity: the non-spherical shape of these explosions.

As long as there is historical record, observers have witnessed the sudden apparition of new, very bright stars on the sky, newcomers that later faded progressively during weeks or months until they completely vanish. The most luminous of these «new stars» are called «supernovae», and modern astrophysics describes some of them (but not all) as the gigantic explosions that signal the end of very massive stars. These stars consume the fuel that makes them shine, the energy source that supports their internal structure against the tendency to shrink induced by the inwards pull of gravity. After using all their supplies, they suffer an energy crisis that leads to an extremely violent collapse and, after that, to an explosion of apocalyptic intensity.

Supernovae have been scientifically studied for many decades, using the information contained in the visible light that they emit. But recent advances in astronomical technology allow to analyze them through «invisible light»: radiation corresponding to bands of the electromagnetic spectrum outside the classical optical band. Observations made from satellites give access to X and gamma rays, two kinds of «light» that can be caught only from space, beyond the atmosphere of the Earth. Javier Gorosabel (Instituto de Astrofísica de Andalucía) belongs to a research team that has devoted many years to the study of gamma-ray bursts (GRBs). The GRB phenomenon is still one of the most appealing mysteries of modern astrophysics, but the studies done up to now have shed light on the nature of these energetic sources. Scientists have found that there are two main groups of GRBs: the short and the long ones. At the same time, there are evidences pointing to an intimate link between gamma-ray bursts and some kinds of supernovae.

This is the case of the gamma-ray burst observed the 18th of February 2006 by the satellite Swift. The explosion was found in such a remote galaxy that it had to happen hundreds of millions of years ago. Even though, this GRB is relatively close to us compared to most known GRBs which gives an idea of the enormous intensity of these events. This GRB was accompanied by X-ray emission and occurred only days before a supernova explosion that received the name SN 2006aj.

The observations made by Gorosabel's team used the 2.2 m telescope of Calar Alto, in «Target of Opportunity» time granted to the GRB program of Alberto Castro-Tirado (IAA). They used, also, the Nordic Optical Telescope at La Palma (Canary Islands) and the AZT-8 telescope (Crimea, Ukraine). The data gathered confirm the already known link between long GRBs and supernovae of certain kinds. Also, these observations gave crucial information on the geometry of the processes involved in the death of massive stars. The key is in polarized light.

Light is propagated through space as a wave, a vibration of the electromagnetic field that can be compared to the waves produced when a stone is dropped on the surface of water. But water waves imply only vertical movements of the surface (up and down), while natural light waves oscillate in all possible planes: up-down, left-right, and all intermediate combinations, none of them dominating over the others. But several physical mechanisms can alter this distribution and make one of the oscillation directions to be dominant: in these cases we speak of polarized light. All processes leading to polarization imply some degree of asymmetry, the existence of privileged directions. The observations indicated that the polarization degree of the light emitted by SN 2006aj was unexpectedly high.


Gorosabel says: «The natural way of explaining our polarization measurements would be to admit that the supernova is undergoing a non-spherical expansion. In other words, the exploding star is emitting material and radiation preferentially towards certain privileged directions.


The first theoretical models of supernova explosions were very simple and, lacking further data, assumed spherical symmetry. This kind of observations, possible thanks to the outstanding polarimetric capabilities of instruments like CAFOS (available at the 2.2 m telescope of Calar Alto) require adapting the models to fit the complexity displayed by this phenomenon. The lack of spherical symmetry detected in several supernova explosions indicates that rotation is playing a major role in the process of stellar death: the rotation axis, and the rotation velocity, determine privileged directions affecting the explosion symmetry and driving several crucial processes implied in the explosion mechanism itself.

Any stellar explosion seen from a distance of hundreds of millions of light-years shows itself as just a tiny point of light. But modern observation technologies, and the ideas of the scientists that use them, allow to extract valuable data from this faint point-like sources, leading to a better knowledge of the geometry and the physical mechanisms involved in a phenomenon whose shape and developement cannot be directly observed.

CAFOS polarimetric image of SN 2006aj (488 kB). The instrument CAFOS attached to the 2.2 m telescope of Calar Alto produces this kind of «stars and stripes» effect in the images when used in polarimetric mode: stellar images appear duplicated, each individual image corresponding to light emmited in a different polarisation plane. The double image of the supernova is marked with arrows.