The President of the autonomous community of Andalusia, Mr. Manuel Chaves González, visited on April 20th Calar Alto Observatory. In this clear, but somewhat cold morning, the President has had the opportunity to get acquainted with the Observatory and its staff. 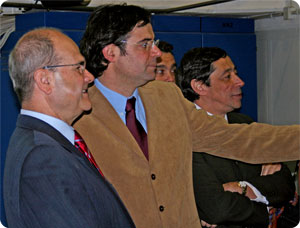 The President was received by Rafael Rodrigo Montero and Paz Juárez Herranz (Vice-president of the Spanish National Research Council, CSIC, and head of the President's Office of the same institution, respectively), by José Carlos del Toro Iniesta (Director of the Astrophysical Institute of Andalusia, IAA), by João Alves (Director of Calar Alto Observatory), and by other local authorities.

Mr. Chaves visited the two main telescopes of this Observatory, the largest placed in continental Europe. Guided by several astronomers from the Observatory’s staff, the Andalusian President received a vivid and direct impression of an astronomical observatory at work, the telescopes, the daily life at the mountain, the scientific and technical work developed at this Center, and the fundamental role played by Calar Alto in the recent thrust of astronomy in Spain, and particularly in Andalusia.


As Mr. Chaves acknowledged in his conversation with the media, he was

impressed by the difference between the stereotype of the old-fashioned astronomer looking through a long tube, and the forefront technological and computational activity that constitutes the real observational work of modern astronomers. He has stated his will to contribute to make this Observatory better known among the Andalusian people, and he has shown a sincere interest for the future perspectives of development of such an exceptional facility placed in Andalusian territory. 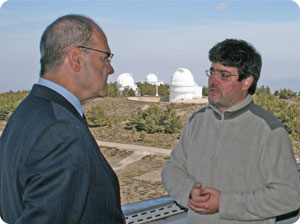 Calar Alto Observatory is located at the highest point (2168 m) of the mountain range Sierra de los Filabres, in the Andalusian province of Almería. It was built from 1973 to 1984 by the German institution Max-Planck Society and, since 2005, it is jointly (50%) financed and operated by the Spanish National Research Council (CSIC) through the Astrophysical Institute of Andalusia (IAA, Granada), and by the German Max-Planck Society through its Max-Planck Institute for Astronomy (MPIA, Heidelberg).

© Calar Alto Observatory, April 2007              This email address is being protected from spambots. You need JavaScript enabled to view it.