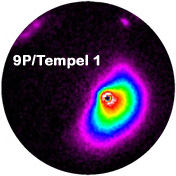 During the 4th of July 2005, NASA's Deep Impact mission hit a comet with a massive projectile while another spacecraft observed the resulting collision from a distance. Fourteen hours after the event, the comet was observed from Calar Alto and some of the results of the observations have been recently published in a work led by L. M. Lara, from the Instituto de Astrofísica de Andalucía (IAA -CSIC, Spain).
Luisa María Lara (Instituto de Astrofísica de Andalucía-CSIC, Spain) leads an international research team that has performed a complete pre- and post-impact follow up of Deep Impact's target, comet 9P/Tempel 1 . The comet was monitored from June 18 until July 12, 2005, as a follow-up to the long-term campaign started in January 2005.  The observations were done from Calar Alto Observatory and from Sierra Nevada Observatory , both placed in South-East Spain.

At Calar Alto, Lara's team used the instrument CAFOS attached to the 2.2 m telescope to obtain direct images and slit spectra that allowed an analysis of the dust production and chemical composition of the comet's gas before, during, and after the impact.

Dirty snowballs
A typical comet is a frozen ball made up of dust and ice composed from different substances. When its nucleus is warmed up by the Sun's heat, the ice sublimates and a dusty and gaseous cloud (the coma) is formed around the cometary nucleus.  The pressure of the solar radiation forces the dust cloud into the well-known tail shape that, however, is only easily seen for the larger and very active comets. 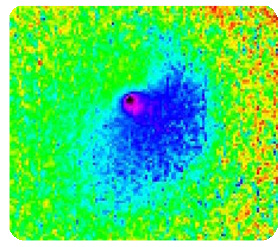 The artificial impact on the nucleus of comet 9p/Tempel 1 induced intensity variations and asymmetries in the coma.  Also, several changes in chemical composition and dust contained in the coma were detected as an immediate result of the collision, which also lasted for at least 40 hours the impact.  The ejecta cloud was still visible in the images taken on July 6 and 7, but it had noticeably changed shape due to solar radiation pressure. 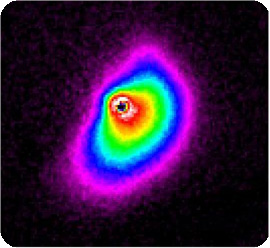 According to Lara's team results , "the amount of dust produced by the projectile represented about 14 hrs of normal comet activity".  A noticeable increase in comet activity was perceived as a result of the impact. However, Lara adds: "Our comet monitoring, which spanned almost 5 nucleus rotations, did not reveal any long-lasting structure in the coma as a consequence of the impact". The transitory effects observed in July had already disappeared in August, according additional observations from La Silla Observatory (ESO) in Chile.
High-resolution images:

Images of comet 9P/Tempel 1 (608 Kb) Images of comet 9P/Tempel 1 obtained at Calar Alto and processed to enhance the structures inside the coma (Laplace filtering). From top left to bottom right, the dates are June 26 and 29, and July 4 and 5 2005. North is up, East is left. On June 26 and 29, a linear structure appeared in east-west direction. On July 4, approx. 15 hours after the Deep Impact collision, the dust cloud produced by the experiment is clearly seen. Forty hours after the impact (July 5), the expanding dust cloud forms a shell that has noticeably changed shape due to the push of Solar radiation pressure. The field of view of each individual image is 60 000 x 60 000 km. Fig. 2 from 2007A&A...465.1061L