Searching for the Little Princes homeland 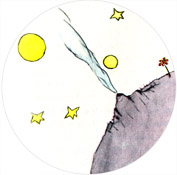 Asteroids are small solid objects circling around the Sun, following orbits located mainly in the so-called “asteroid belt”, an ill-defined region between Mars and Jupiter. Antoine de Saint-Exupéry’s most famous character, the Little Prince, lived on a volcanic asteroid whose volcanoes the Prince took care of.

But it is believed that real asteroids are seldom volcanic. A volcanic or, more properly, basaltic asteroid, forms only if the body has melted partially during its history, allowing heavy elements (metals) to sink towards its centre, leaving lighter rocks on the mantle, and forming a volcanic crust of basalt through emission of lava flows. This process is called differentiation, and an asteroid has to be quite large for it to happen.

Only one big asteroid shows a basaltic crust, Vesta, and there is a complete family of smaller objects showing similar surface and orbital characteristics, thought to be fragments taken away from Vesta by large impacts: these asteroids constitute the “Vesta family.” However, there are reasons to expect that these objects should not be so scarce. Astronomers think that there should have existed many clones of Vesta in the old Solar System, and some of them or, at least, some of their fragments, could still be out there. 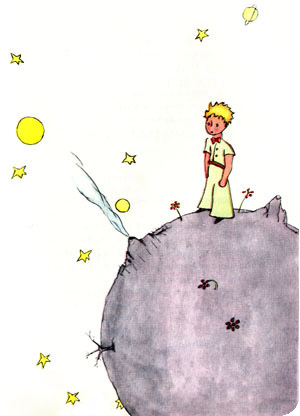 Recent studies have discovered that several tiny near-Earth asteroids are basaltic and they are not necessarily lost members of the Vesta family. Furthermore, a basaltic asteroid, Magnya, was found in the outer part of the asteroid belt in 2000.

The researchers René Duffard (Instituto de Astrofísica de Andalucía) and Fernando Roig (Observatório Nacional do Brazil) have devoted a part of their scientific efforts to follow the track of basaltic asteroids, and they explain that Magnya “is too far away from the Vesta family to have a real probability of being a fragment from Vesta’s crust”. Convinced that there should exist more basaltic little worlds unrelated to Vesta, they undertook a search for more of these exotic objects.

In their words, “the diversity in the collection of basaltic meteorites requires more than one basaltic parent body.” In a study recently published, they confirm having found two more asteroids in the outer belt to be basaltic. Their names are Kumakiri and 1991 RY16. The second one is still lacking a real name and provisionally bears a coded designation. Their mineralogical signature, and their orbital characteristics, place both of them clearly outside the Vesta family. The observations were done at Calar Alto Observatory, using the CAFOS camera attached to the 2.2 m telescope.

Duffard and Roig explain that Magnya, Kumakiri and 1991 RY16 "are well separated from each other in terms of proper elements, and none of them belong to any of the known asteroid families”. Also, several non-standard spectral features could place them as the first examples of a totally new class of objects. These investigators are now planning more observations in order to better define the properties of these asteroids, and to enlarge the class of basaltic asteroids outside the Vesta family. The Little Prince lived on asteroid B612, bearing three volcanoes and one rose. Real volcanic asteroids are already here. But, where are the roses?

© Calar Alto Observatory, November 2007           This email address is being protected from spambots. You need JavaScript enabled to view it.