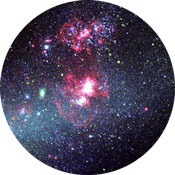 Astronomers deduced that NGC 2366 underwent a massive starburst episode only 50 million years ago and find that intense star formation is still taking place at several areas of this galaxy.  This image beautifully displays the regions where young stars are being formed (red nebulae) because the surrounding hydrogen gas (the raw material from which stars form) has already been ionised by ultraviolet radiation from young stars. This ionised hydrogen is seen also as large filaments and shell structures shining in red throughout the this galaxy. The most outstanding star forming regions are seen towards the upper-right side of the image. The telltale youth of the stars that constitute this galaxy can be seen in the bluish colours of its elongated main body. 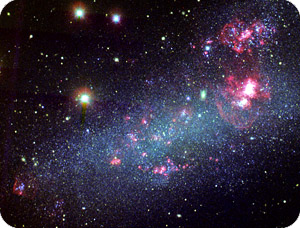 The image was obtained by Janine van Eymeren (AIRUB, ATNF) and Ángel R. López-Sánchez (CSIRO/ATNF) with the MOSCA camera attached to the 3.5 m telescope of Calar Alto Observatory.  It was composed from individual frames taken in the B, R and H-alpha bands. North is left, and East is down. The width of the image spans one third of the apparent size of the full Moon (approx. 10 arcminutes).

The researchers performed these observations with the aim of tracing the ionised gas structures shining in the red light that astronomers call “H-alpha”. To do this they obtained deep (one hour integration) H-alpha images of this galaxy. The energy needed to make all this gas shine in red light is related to the energy coming from the young massive blue stars just formed, and astronomers can even deduce if these young stars are, or are not, the only energy source powering the reddish nebulae. The starburst mode of forming stars, astronomers believe, is an important one throughout the Universe but there is much to understand on why a galaxy chooses to suddenly transform its gas into stars at a colossal rate and with magnificent fireworks.

© Calar Alto Observatory, February 2008                This email address is being protected from spambots. You need JavaScript enabled to view it.