The great design spiral galaxy M74 on a bad night

The ALHAMBRA project, whose Principal Investigator is Professor Mariano Moles (Astrophysical Institute of Andalusia, Granada) and is performed with the 3.5 m telescope of Calar Alto Observatory (Almería), has obtained an impressive image of the outstanding spiral galaxy M74, an object placed at approximately 30 millions of light-years from Earth, in the constellation Pisces.

In words of Alberto Fernández-Soto (University of Valencia), one of the researchers involved, "this is an image we took one night when the sky conditions were not optimal to gather scientific data for the Project". The image was taken by Alberto Fernández-Soto and Vicent Martínez (University of Valencia) and Sebastián Sánchez (Calar Alto Observatory).

M74 is an outstanding spiral galaxy with many star-forming regions at a distance of about 30 millions light years. The size of M74 is very similar to that of our own Galaxy, and because it is seen face-on, it makes for an ideal laboratory for astronomers to study the workings of a galaxy like ours. Long dust shreds (seen as reddish bands in the photograph) are interlaced with the elegant spiral arms sprinkled with bight and bluish star clusters. The pinky spots mark hydrogen nebulae, the nurseries of stars in this galaxy. 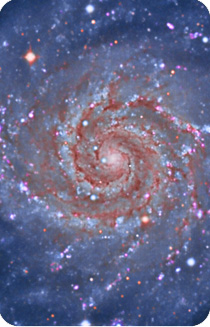 M74 seems to float calmly in this image, but in reality it tells us a story of very agitated physical processes leading to star birth from clouds made up of gas and dust. The most massive stars (more than ten times that of our Sun) will end their lives in gigantic supernova explosions that will spread across the galaxy the heavy chemical elements that eventually might end up forming planets such as ours.

Vicent Martínez explains that this image is the result of combining three different individual shots, each of them taken through a different filter: r' filter from SDSS -corresponding approximately to red colour- and two more filters specifically designed for the ALHAMBRA project (both with passbands 30 nm wide and centred at 489 and 520 nm, respectively). The total integration time was 25 minutes, distributed into 5 exposures of 5 minutes each.

Images taken with the first of the forementioned ALHAMBRA filters are very sensitive to the light emitted from star forming regions, that usually display the green emission lines of oxigen III and the blue light of hidrogen-beta. The astrophotographer of the Observatory of the University of Valencia, Vicent Peris, produced the final image adopting the r' image as representative of red light, the 520 nm image as green and the maximum of both 489 and 520 nm filters as blue. By carefully balancing the intensity of each of the three images, the final result comes close to what a human eye would be able to see, if observing this galaxy from much closer. All image processing was done with  PixInsight Core 1.0 software.