Calar Alto Academy was initiated in 2007 with the aim to give students from different Spanish universities the chance to perform professional observational work at Calar Alto Observatory. The second edition of this innovative educational project has increased the number of participating universities and has almost doubled the quantity of visiting students, in a significant step towards the consolidation of this undergraduate and graduate school of observational astronomy.

As in its previous edition, the Calar Alto Academy allows advanced under-graduates and graduate students to experience life and work at a modern astronomical observatory. Guided by their professors and in close interaction with Calar Alto staff, students from six different universities have visited Calar Alto observatory from March to April 2008, and they have received a vivid hands-on experience in professional astronomy, including different observational and data handling techniques. 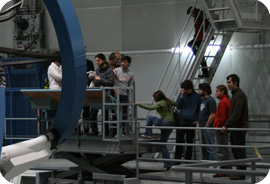 The observational projects performed include direct imaging both in wide and narrow filters for astrometry and photometry, and low and medium-resolution spectroscopy. The programs designed by the students were devoted to the study of the interstellar medium, stellar astrophysics and extragalactic astronomy. 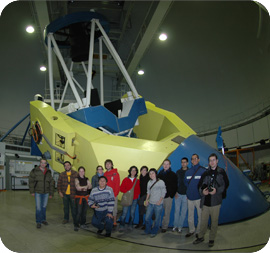 2008 edition of Calar Alto Academy included the participation of Universitat de València, Universidad de Murcia, Universidad Autónoma de Madrid, Universitat de Barcelona, Universidad de Granada and the joint Master program from Universidad Complutense de Madrid and Universidad Autónoma de Madrid (POPIA). Two more universities than in 2007, in a round of activities that brought 71 students and 11 university professors to perform the observations that they had previously planned at their institutions, yielding sets of data that will be reduced as a continuation of their formative process. The 2.2 m telescope equipped with the instrument CAFOS was used in this edition.

The significant success of the 2008 edition of Calar Alto Academy opens the road towards the consolidation of this experience, that no doubt will be repeated during the next academic year. The Observatory will be glad to be contacted by the universities interested in taking part in the 2009 edition of the Academy.