One of the teams of winners of the 2007 edition of ESO contest "Catch a Star" enjoyed their prize in June 2008: a four days visit to Calar Alto Observatory offered by the Spanish Council for Scientific Research (CSIC). During their stay at these Spanish-German facilities placed in South-Eastern Spain, they had the opportunity to learn how a modern observatory is organised, how do modern telescopes and instruments work, and how real astronomical observations are performed. 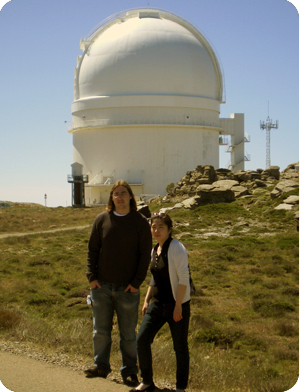 The students Remi Takase, Victor Raimbault and Thomas Salez won one of the prizes of the 2007 edition of ESO contest "Catch a Star". They performed an interesting work, Light on Dark Matter, where they drew a detailed landscape of dark matter in the universe, from galactic to cosmological scales, from both a theoretical and practical points of view, including the real, hands-on treatment of spectra from edge-on spiral galaxies to derive their rotation curves, whose interpretation leads to the evidence for dark matter inside disk galaxies. These students came from the very prestigious Lycée Louis le Grand, at Paris (France), and their work was directed by their professor Michel Faye, from the same school.

The team (students and professor) spent more than three days at the observatory, during which they got in touch with all telescopes of the German Spanish Astronomical Centre, their instrumentation, control rooms and ancillary installations. 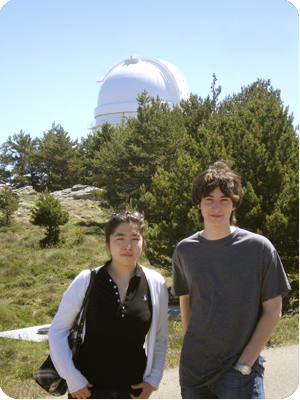 They also got acquainted with the history of the observatory and had the experience of attending real-life night-time astronomical observations: they learned how high-dispersion spectra were taken in the frame of the ground support for COROT space mission, with the 2.2 m telescope and FOCES spectrograph. They also got a glance on how the 3.5 m telescope was used with Omega-Cass camera, for the observation of giant stars in their pre-planetary nebula stage.

During the later days of their stay at Spain, Catch a Star winners paid visits to the main monuments and touristic places in Almería and Granada cities, including a guided tour at Granada's science museum, Parque de las Ciencias.

We hope that their real-life experience at Calar Alto observatory will boost the students' interest for science in general, and for astronomy in particular. It was a pleasure having you with us these days.