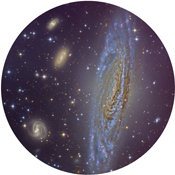 The spiral galaxy NGC 7331, in Pegasus, can be seen with small telescopes under dark skies as a faint fuzzy spot. It is an island universe similar to our own Galaxy (or maybe somewhat larger) and placed at a distance of 50 million light-years. NGC 7331 was discovered by Wilhelm Herschel in 1784, and it shows all its magnificence in long-exposure photographs taken through large telescopes.

This Calar Alto image offers one of the best snapshots ever obtained of this stellar system. It was produced with the camera LAICA attached to the 3.5 m telescope of Calar Alto Observatory. The warped disk of NGC 7331 shows its outstanding spiral structure shinning behind a number of stars belonging to our Galaxy, and in front of a rich background populated by an overwhelming variety of distant galaxies. A good fraction of the field of view is occupied by a thin haze of the ghostly, fuzzy and dusty nebulae known as galactic cirrus. 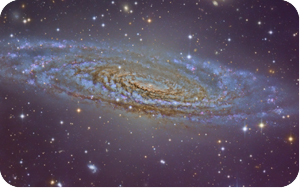 From galactic cirrus to stars and galaxies

Galactic cirrus are diffuse clouds made up from dust, complex organic molecules and gas. Normal reflection nebulae are strongly lighted by one or several close and hot stars, but galactic cirrus shine due to the reflection of faint and diffuse light coming from the Galaxy as a whole. These structures, better seen in the lower part of the image, have been caught thanks to the darkness of Calar Alto skies, to the quality of the instruments used and thanks to the complex and careful method applied to process the data. Vicent Peris, the astrophotographer of the Observatory of the University of Valencia and author of this image, explains that "good data and careful digital processing allow to assert that all diffuse traits in the image are real, with the only exception of the bluish halo around the brightest star". 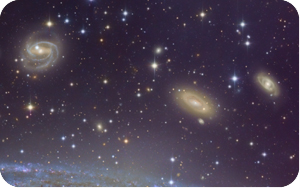 This image is outstanding first and foremost for the variety of objects that it contains. It will be a good challenge for astronomers to get the nature of each of these bodies, from point-like foreground stars to faint background galaxies, and to the intricate structure of the main galaxy.

Good image processing should not benefit one kind of objects at the expense of others but, instead, it has to aim at an equilibrium. To reach this goal, the image of NGC 7331 has been processed using wavelet techniques, a mathematical procedure that allows the separation of structures present in the image according to their characteristic sizes, 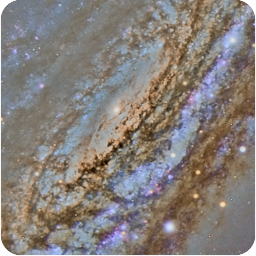 hence allowing an individual processing to each level. The final result significantly improves the original quality. That is why this image contains accurate representations of objects as different as the foreground nebulae (belonging, as all individual stars, to our own Galaxy) or the external haloes of small and big galaxies, and the internal structures of all of them.

Colour is, also, a very important side of this photograph. The chromatic balance has been obtained assuming that all the light coming from the main galaxy, as a whole, is white. This reference allows to distinguish which parts of NGC 7331 are bluer or redder. This also makes possible to compare the hue of the main galaxy with that of its smaller neighbours and background objects.

The image was obtained with the LAICA (Large Area Imager for Calar Alto) camera attached to the prime focus of the 3.5 m Zeiss telescope of Calar Alto Observatory. The view corresponds to one of the four detectors of this camera and covers an apparent field of view of 15 × 15 arcminutes. North is up, East is left. The picture is composed from different individual shots through Johnson filters B and V, and Sloan r' (5 images of 10 minutes and 3 of 1 minute both in B and r', plus 3 shots of 10 minutes and 3 of 1 minute in V: 2 hours and 19 minutes as total integration time).

The observations were planned by Vicent Peris, who also processed the images with the software PixInsight. The data were taken by Gilles Bergond.

Links to the images:

Enlargement centred on the area of the satellite galaxies. The edge of NGC 7331 is seen in the lower part of the view. Rotated (North is right, East is up). High resolution (2302x1439), uncompressed format (9.49 MB, TIFF).

Enlargement centred on the area of the satellite galaxies. The edge of NGC 7331 is seen in the lower part of the view. Rotated (North is right, East is up). High resolution (2302x1439), compressed format (1.64 MB, JPEG).

© Calar Alto Observatory, October 2008                This email address is being protected from spambots. You need JavaScript enabled to view it.