Library of galaxy histories reconstructed from motions of stars

The CALIFA survey allows to map the orbits of the stars of a sample of 300 galaxies, a fundamental information to know how they formed and evolved.

Just like the Sun is moving in our Galaxy, the Milky Way, all the stars in galaxies are moving, but with very different orbits: some of the stars have strong rotations, while others may be moving randomly with no clear rotation. Comparing the fraction of stars on different orbits we can find out how galaxies form and evolve. An international team of astronomers has derived directly, for the first time, the orbital distribution of a galaxy sample, containing more than 300 galaxies of the local universe. The results, published in Nature Astronomy, are based on the CALIFA survey, a project developed at Calar Alto Observatory.

Galaxies are the largest structures in the universe, and scientist study how they evolve to understand the history of the universe. Galaxy formation entails the hierarchical assembly of halos of dark matter (a type of matter that has not been directly observed and whose existence and properties are inferred from its gravitational effects), along with the condensation of normal matter at the halos´ center, where stellar formation takes place. Stars that formed from a settled, thin gas disk and then lived through dynamically quiescent times will present near circular orbits, while stars with random motions are the result of turbulent environments, either at birth or later, with galactic mergers.

Thus, the motions of stars in a galaxy are like a history book, they record the information about their birth and growth environment, and it may tell us how the galaxy was formed. "However, the motion of each single star is not directly observable in external galaxies. External galaxies are projected on the observational plane as an image and we cannot resolve the discrete stars in it" -says Ling Zhu, researcher from the Max Planck Institute for Astronomy who leads the study-. "The CALIFA survey uses a recently developed technique, integral field spectroscopy, which can observe the external galaxies in such a way that it provides the overall motion of stars integrated along the line of sight at each position across the image. Thus, we can get kinematic maps of each galaxy."

For this study, the team has built models for all 300 galaxies and found the stellar orbit distribution of those galaxies, representative of the general properties of galaxies in the local universe.

The maps show changes in galactic orbit distribution depending on the total stellar mass of the galaxies. The ordered-rotating orbits are most prominent in galaxies with total stellar masses of 10 billion solar masses, and least important for the most massive ones. Random-motion orbits unsurprisingly dominate the most massive galaxies (more than 100 billion solar masses). "This is the first orbit-based mass sequence across all morphological types. It includes flourishing information of a galaxy's past, basically whether it had been a quiet succession of only smaller mergers or shaped by a violent major merger. Further studies are needed to understand the details", says Glenn van de Ven (ESO). 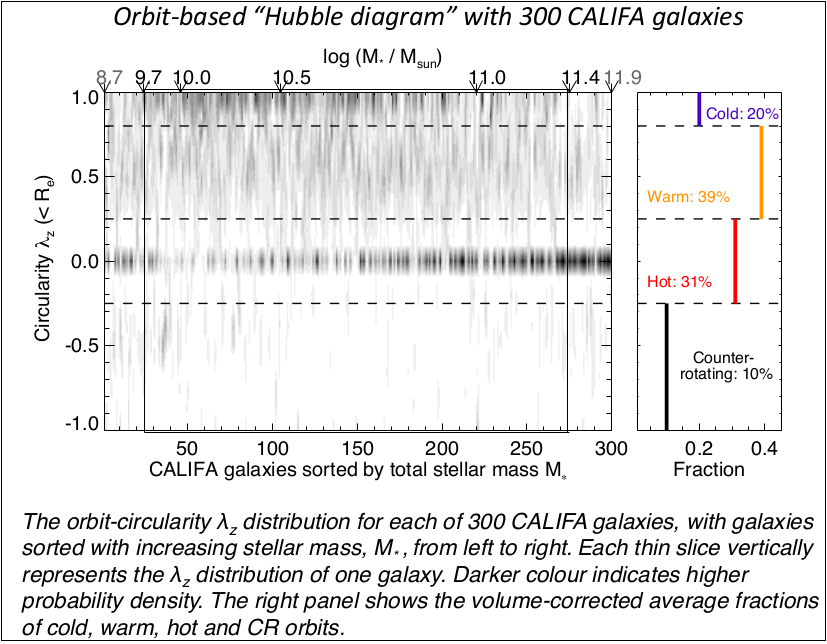 The researchers had found a new and accurate method of reading off a galaxy's history – and their survey with its data sets for 300 galaxies turned out to be the largest existing library of galaxy history books.

"This work highlights the importance of integral field spectroscopy and, in particular, of large-scale surveys such as the CALIFA project. The significant contribution of what we call "hot" orbits, a mixture of rotation and random movements of the stellar component, poses important challenges to cosmological models of galaxy formation and evolution," says Rubén García Benito, a researcher at the Institute of Astrophysics of Andalusia (IAA-CSIC) participating in the project.

Given that CALIFA’s selection function allows the correction of the sample to volume averages, their results represent an observationally-determined orbit distribution of galaxies in the present-day universe. They lend themselves thus to direct comparison with samples of cosmological simulations of galaxies in a cosmological context. In this sense, these results open a quantitative way –and at the same time a qualitatively new window– for comparing galaxy simulations to the observed galaxy population in the present-day universe. 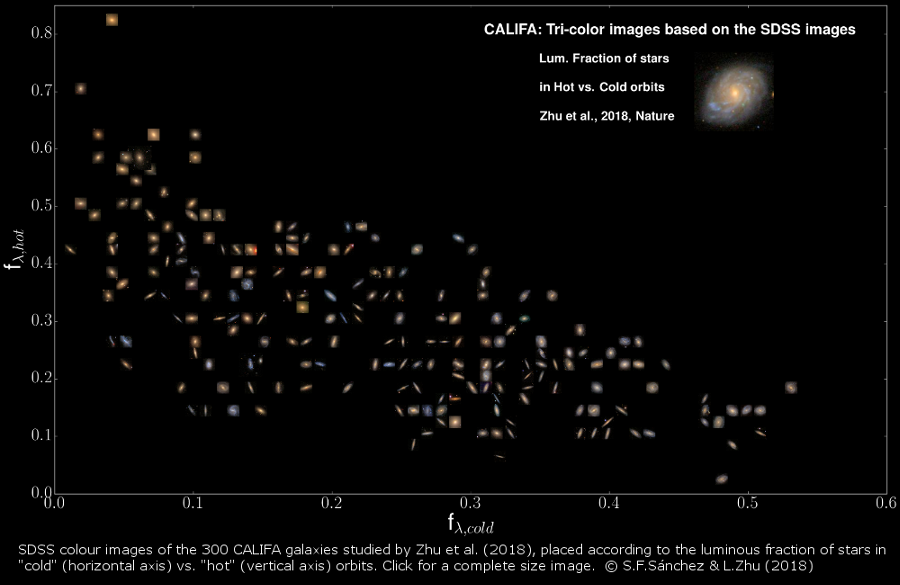