Most galaxies in the local Universe display beautiful spiral arms, concentrations of bright stars in a rotating disk, like a whirl around a bulge made of older stars. Although omnipresent, the formation and persistence of this twisting spiral structure is still not well understood, despite the arms should play a major role in the chemical and dynamical evolution of disk galaxies. 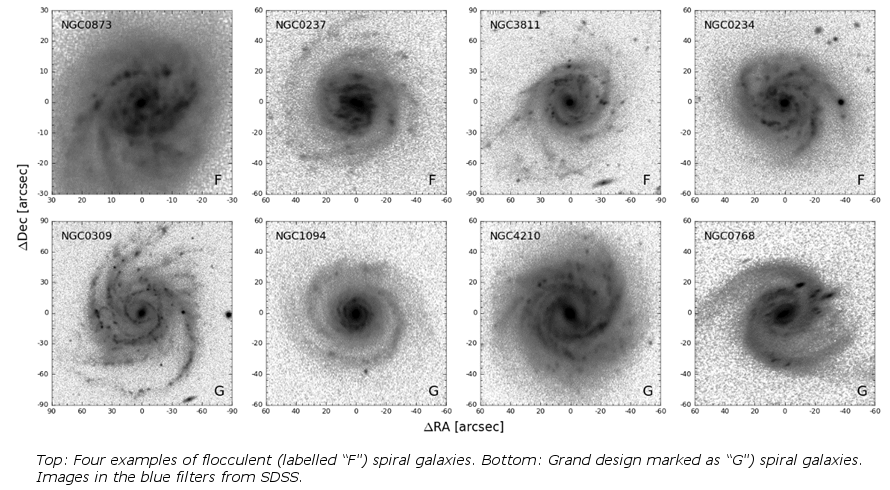 Spiral galaxies can be classified into two main groups, according to the overall aspect of their arms: flocculent (labelled F in the images) or grand design (labelled G). Grand design spirals show continuous, smoother and symmetric arms, while flocculent galaxies present “patches” in less symmetric and distinguishable arms. By studying properties (like the age and chemical composition) of stars and gas within vs. in between the arms for both subtypes, we could better understand how these different spiral arms form and evolve with time.

To tackle this problem, as part of the work carried out during her PhD, Laura Sánchez-Menguiano studied a sample of spiral galaxies, taken from the Calar Alto Legacy Integral Field spectroscopy Area (CALIFA) survey, and measured the oxygen abundance of the ionized gas associated with star formation in these galaxies. Oxygen constitutes the best proxy for studying the gas metallicity, that determines the chemistry of the next generations of stars to be born. As a major spectroscopic survey of galaxies in the local Universe, CALIFA provides, among many other information, complete maps of the oxygen emission for hundreds of spirals.

“It comprises the most complete 2D characterization of the oxygen abundance distribution of the ionized gas in a large and statistically significant sample of spiral galaxies up to date”, says L. Sánchez-Menguiano, who selected a subsample of (nearly face-on) spirals from CALIFA, both flocculent and grand design, to look for differences between them.

Previous observations (and models/simulations of galaxy formation) have shown a gradient in the oxygen abundance – the gas becomes less metallic when going further away from the galaxy center–, as expected from an inside-out scenario for building the disk. In this study, Sánchez-Menguiano et al. went a step further seeking for abundance variations between arm and inter-arm regions. In addition, they also found other deviations from the radial behavior in the form of a flattening (stabilization) of the amount of oxygen in the outermost regions of the disc. Equally surprising, there is also an unexpected lack of oxygen in the innermost regions of the most massive galaxies in their sample.

Also, while in the grand design spirals no statistical difference could be found between the inside- and inter-arm regions (with respect to the overall negative gradient), subtle differences were observed for flocculent spirals, indicating that the mechanism(s) forming arms in flocculent spirals may be different from the one(s) at play in grand designs. The presence of a bar, a common feature in spiral galaxies (like our own Milky Way), is also found to play some role.

Importantly, most of the findings based on CALIFA data are confirmed by higher resolution data taken with the MUSE instrument on the ESO Very Large Telescope, in Chile. “These results provide strong constraints to chemical evolution models aimed at explaining the formation and evolution of spiral galaxies, trying to do our bit in the comprehension of the Universe around us” she concludes.

Laura Sánchez-Menguiano will receive the best PhD prize during the opening ceremony of the XIIIth SEA (Sociedad Española de Astronomía) meeting in Salamanca, on July 16th, 2018.