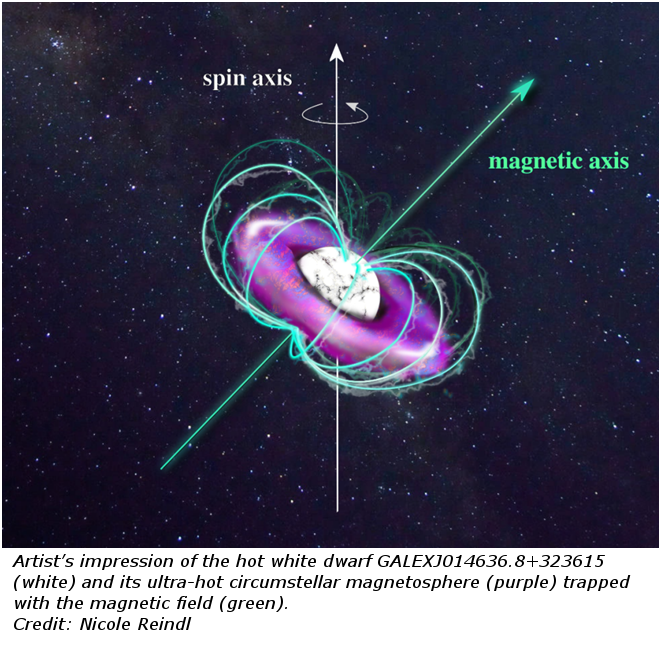 Solving a decades-old mystery, an international team of astronomers have discovered an extremely hot magnetosphere around a white dwarf, a remnant of a star like our Sun. The work, making use of Calar Alto data, was led by Dr Nicole Reindl, Research Fellow of the Royal Commission 1851, based at the University of Leicester, and is published today (7 November) in the journal Monthly Notices of the Royal Astronomical Society.

White dwarfs are the final stage in the lives of stars like our Sun. At the end of its life, these stars eject their outer atmospheres, leaving behind a hot, compact and dense core that cools over billions of years. The temperature on their surfaces is typically around 100,000 degrees Celsius (in comparison the surface of the Sun is 5800 degrees).

Some white dwarfs though challenge scientists, as they show evidence for highly ionised metals. In astronomy ‘metals’ describe every element heavier than helium, and high ionisation here means that all but one of the outer electrons usually in their atoms have been stripped away. That process needs a temperature of 1 million degrees Celsius, so far higher than the surface of even the hottest white dwarf stars.

Reindl’s team used the 3.5-metre Calar Alto telescope in Spain to discover and observe a white dwarf in the direction of the constellation of Triangulum, catalogued as GALEXJ014636.8+323615, located 1200 light years from the Sun. Analysing the light from the white dwarf with a technique known as spectroscopy, where the light is dispersed into its constituent colours, revealed the signatures of highly ionised metals. Intriguingly these varied over a period of six hours – the same time it takes for the white dwarf to rotate.

Reindl and her team conclude that the magnetic field around the star – the magnetosphere - traps material flowing from its surface. Shocks within the magnetosphere heat it the material dramatically, stripping almost all the electrons from the metal atoms. 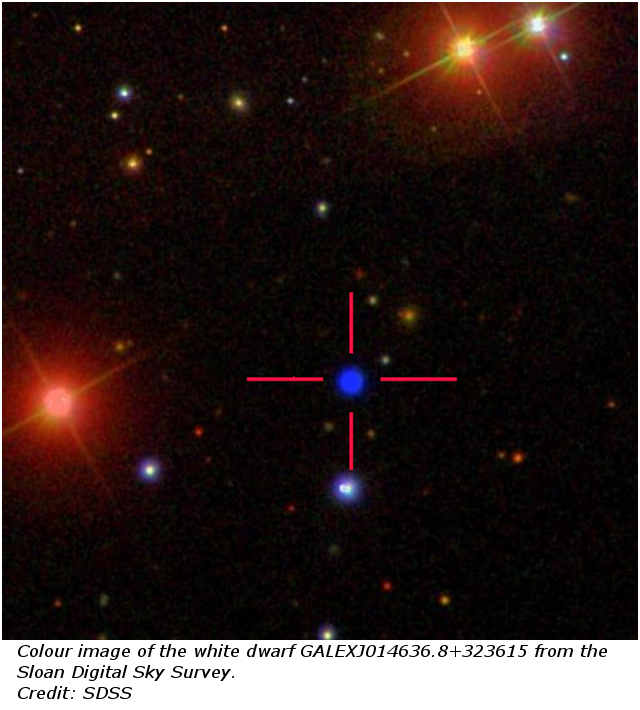 “The axis of the magnetic field of the white dwarf is tilted from its rotational axis. This means that the amount of shock-heated material we see varies as the star rotates.”

“After decades of finding more and more of these obscure stars without having a clue where these highly ionised metals come from”, she continues, “our shock-heated magnetosphere model finally explains their origin.”

Magnetospheres are found around other types of stars, but this is the first report of one around a white dwarf. The discovery might have far-reaching consequences. “We simply didn’t take this into account”, admits Reindl. “Ignoring their magnetospheres could mean measurements of other basic properties of white dwarfs are wrong, like their temperatures and masses.”

It may be that a quarter of white dwarfs go through a stage of trapping and super-heating material. Reindl and her team now plan to model them in detail and to extend their research by studying more of these fascinating objects.