LUCA is proposed as a new generation instrument for the Calar Alto Observatory (CAHA) 3.5-m telescope.

The project, conceived at the Instituto de Astrofísica de Andalucía (IAA-CSIC), has been selected by the observatory's advisory committee to finance the feasibility study, managed by the University of Almería (UAL). 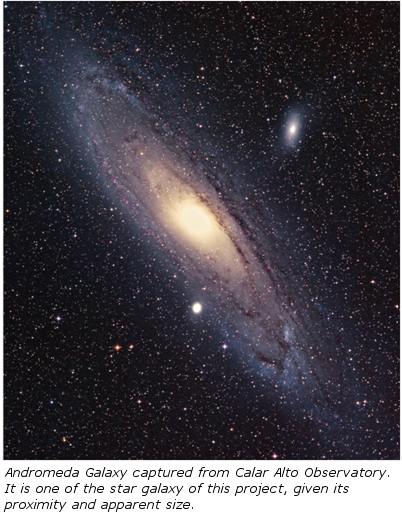 Calar Alto Observatory remains at the forefront of Astronomy thanks to its firm commitment with technological renovation, which resulted this year in the call for the development of a new instrument for the 3.5-m telescope. The selected project has been LUCA (Local Universe from Calar Alto), which aims to unravel physical processes at small enough scale to study how the star formation and evolution affects the formation and evolution of galaxies in our local universe.

The feasibility phase has already started, funded by the Junta de Andalucía and the University of Almería (UAL) in collaboration with the Instituto de Astronfísica de Granada (IAA-CSIC) with a hundred thousand euros.

"Galaxies are large aggregates of gas, stars, dust and dark matter extending over thousands of light years. But the stellar formation and evolution processes that determine the own galaxy evolution occur at small scales, of a few tens of light years, and studying them is essential in order to understand galaxies", points out Ruben García Benito, researcher of the IAA-CSIC who is coordinating the project scientific part.

We have a model that explains satisfactorily the structure of the universe on a large scale, a complex network of voids, nodes and filaments formed by galaxies and clusters of galaxies, but there are still gaps in our knowledge at smaller scales and, for example, we do not have satisfactory explanations on how the galaxies form and evolve depending on the environment.

In this scenario, LUCA looks forward to provide key information through the detailed study of more than five hundred galaxies in the local universe, for which maps of stellar populations will be obtained, as well as their movements and their chemical composition, and also the properties of the interstellar medium at these scales. This information will allow us to establish the processes that govern the physics of stellar formation and evolution at small scale and its relation with the formation and evolution of galaxies.

LUCA presents a technical complexity derived from the need to combine wide-field (thousands of light years) observations together with other regions of a few light years. "The instrument, an integral field spectrograph with thousands of optical fibers, will allow the astronomers to map our universe neighborhood with an angular and physically-high resolution. LUCA will be able to observe large pieces of the sky generating a massive quantity of spectral data cubes in the visible range", says Francisco Prada, Project's PI at the Instituto de Astronfísica de Andalucía (IAA-CSIC).

The instrument, which according to the evaluation committee will clearly benefit the Observatory in terms of competitiveness and leadership in modern astrophysics, now faces its viability phase, carried out by an international collaboration led by the IAA-CSIC and formed by the University of Almería, the Laboratory of Astrophysics of Marseille, the University of Durham in England and the Astronomical Observatory of Australia.