In an astronomical observatory, like Calar Alto, IT is fundamental: Control of telescopes and scientific instrumentation, data acquisition, data storage and its efficient management and making them available to the scientific community relays on the IT infrastructure. Besides the correct exploitation of last generation instruments like CARMENES or PANIC, needs a huge amount of IT resources, as well as the research or administrative activity of the center. In order to proportionate an adequate IT infrastructure, the Calar Alto server virtualization has just been finished, a project executed by Calar Alto engineering staff and funds with ERDF.

Server virtualization consists on the implementation of a three physic server farm, a control server (based on a virtual machine which runs inside the farm) and a disk cabinet system for storage. Thanks to this, servers and other computers can be virtual machines (in fact, software) running inside a reduce set of big computers (the farm). “This way, we can have a lot of virtual machines running into a reduce set of physical servers, saving energy, ease of use and management with a better security”, points out Enrique de Guindos (CAHA), Computer Department Head and responsible of the Virtualization Project. 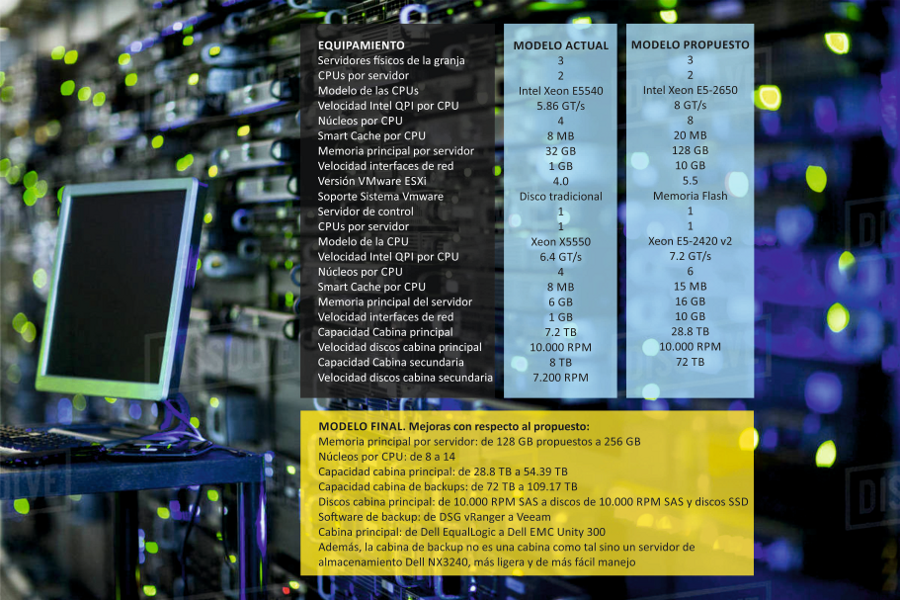 “Although a first generation of virtualization was already operating in the Observatory, its seniority meant a considerable increase in the cost of extending the guarantee every year – says Enrique de Guindos -. And the infrastructure was at its capacity limit”.

In this way, a brand new equipment has been purchased, which adapts to the new needs of the Observatory and has enough growth capacity to address future projects.