It uses data from previous surveys and catalogs, as well as observations with Astralux camera, installed in the 2.2-meter telescope of the Calar Alto Observatory

In our galactic environment only one in two million is a O-type star, a kind of objects that have from sixteen to more than a hundred solar masses and a luminosity up to several million times that of the Sun. These stars, which end in supernova explosions, have a decisive influence on the structure and evolution of galaxies. In addition, they are responsible for the existence of, among others, some of the elements that make us up, but their scarcity makes their knowledge difficult. MONOS project has been designed to collect and acquire as much information as possible about a catalog of O-type stars, and in its first phase points out that these stellar giants tend to group in multiple systems rather than in pairs.

Very massive stars are almost never alone, and they form double, triple or multiple systems. "A lucky feature that allows us to know the mass of each of them, but also unfortunate because several nearby stars may seem a single object from our perspective and because studying this type of systems is technically very complex", says Jesús Maíz Apellániz (CAB- CSIC / INTA), principal investigator of the project. 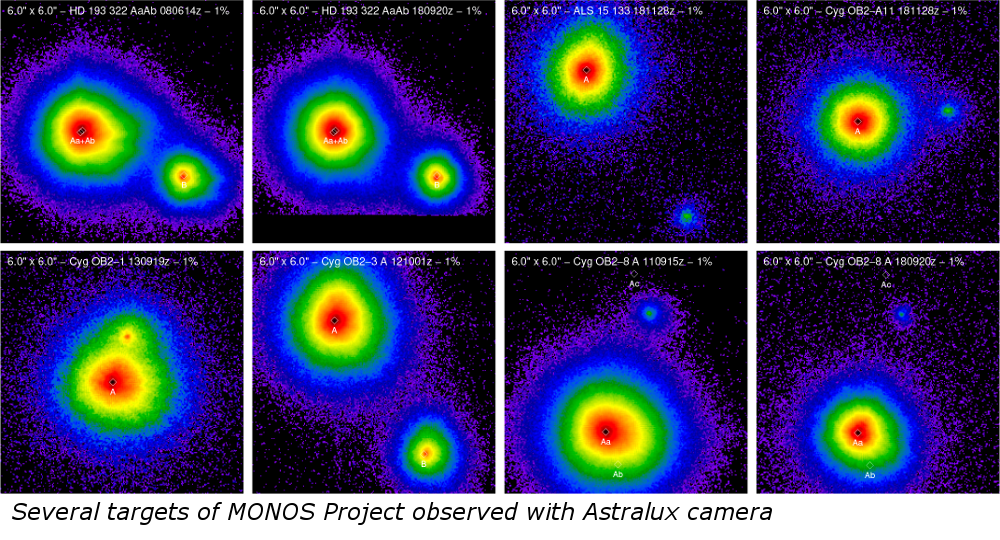 MONOS project uses data from previous surveys and catalogs, as well as data obtained with the Astralux camera, which operates in the 2.2-meter telescope of the Calar Alto Observatory. Astralux obtains images with a resolution close to that of the Hubble Space Telescope thanks to what is known as lucky imaging, which consists of selecting the best photographs from a series obtained over several minutes at a rhythm of several tens of takes per second.

MONOS offers homogeneous and updated spectroscopic information on a catalog of ninety-two binary and multiple O-type stars. The spectrum of a celestial object allows us to know its basic characteristics, such as distance, age, luminosity or even the rate of mass loss. Very necessary information in the case of type O stars.

"Our knowledge of O-type stars is still quite incomplete", says Alfredo Sota, a researcher at the Institute of Astrophysics of Andalusia (IAA-CSIC) who participates in the project. “If, as we think, most of these objects are born in short period multiple systems, many will interact with each other, even exchanging matter. Accurate knowledge of the properties of these binary systems is crucial to understanding the role that massive stars play as a population within galaxies".

MONOS is a long-term project, which will expand the star catalog and study the objects to define their orbits. "The variety of time scales makes astronomers take some observational projects with patience and historical perspective", says Jesús Maíz Apellániz (CAB-CSIC / INTA). We may never see a star completing an orbit around its companion, but it is important to take quality data today so that future generations can complete the task. In this sense, it is very useful to have instruments installed for long periods of time to repeat the observations of binary star systems with years and even decades of difference, thus minimizing differences in methodology and calibration between different devices."

This first work published within the project concludes that the majority of massive stars have only one massive companion nearby, and that the clear tendency is oriented towards the formation of multiple systems with lower mass stars.