The mirror of the SUNRISE mission, which will study the Sun from a stratospheric balloon, gets ready at Calar Alto 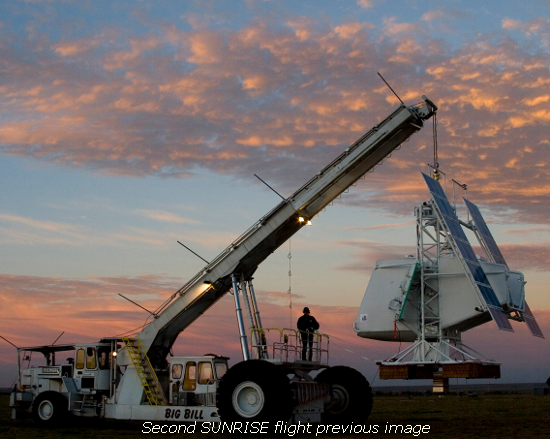 The SUNRISE mirror, with a diameter of one meter, undergoes the aluminizing process as part of the preparations for the next mission flight.

SUNRISE, a mission designed to study the Sun’s magnetic field from a stratospheric balloon, faces its third flight after its successful trips flying over the Arctic in 2009 and 2013. The instrumentation was recovered in both occasions, and now the mission team focuses on the preparation of the next phase, which will take place in 2021. In late September, the aluminizing of the SUNRISE telescope mirror took place at Calar Alto, a service offered by the observatory that permits to preserve the optimal conditions for observations.

“Telescopes have mirrors whose reflecting surfaces, normally made of aluminum, have to be renewed in order to keep their efficiency - points out Jesús Aceituno, Calar Alto Observatory Director -. The best observatories in the world are equipped with facilities to re-aluminize the mirrors periodically, and at Calar Alto we have two of such devices, that we use for our telescopes as well as for external projects; as an example, the Herschel Space Telescope of the European Space Agency has got an aluminum layer from Calar Alto, and SUNRISE has just left our facilities in optimal conditions”.

SUNRISE will observe the Sun from a privileged place, in the Arctic and at an altitude of about forty kilometers,   which avoids the day and night cycles and the image degradation caused by the terrestrial atmosphere. With a solar telescope of one meter diameter, it is able to observe details down to a hundred kilometers at the Sun’s surface. 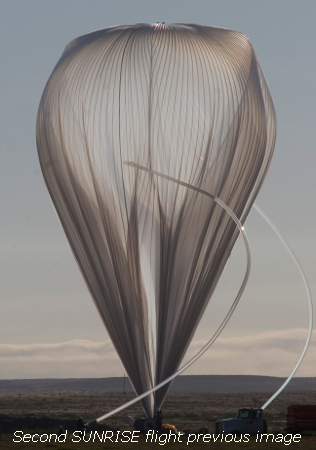 Sunrise III, which will fly in June 2021, shows new features with respect to the previous phases. It includes a new magnetograph, IMaX+, developed by a consortium of institutions lead by the Instituto de Astrofísica de Andalucía (IAA-CSIC). IMaX+ inherits IMaX (Imaging MAgnetograph eXperiment) technology, developed in previous flights, while adding features and improvements like a bigger field of view, two new cameras produced in-house, or the possibility of tuning it online, among others. IMaX+ was designed for studying the Sun’s magnetic field with unprecedented resolution and for periods of several days with a constant image quality, which allows us to progress notably in our knowledge of the solar magnetism, its evolution and its effects on the interplanetary medium.

The mission incorporates a gondola and a new guiding plus pointing system, provided by the Applied Physics Laboratory at Johns Hopkins University (Maryland, USA). It also includes a new post-focal  instrumentation as well as a new instrument, SUSI (Sunrise Ultraviolet Spectropolarimeter and Imager), developed at  the Max Planck Institute for research in the Solar System  (MPS, Germany) which also developed the telescope of the mission.

The SUNRISE mission has inherited the strengths of some of the best solar observatories, like the Swedish Solar Telescope (SST, La Palma Island) or the HINODE satellite, and it introduces improvements like the observation in the ultraviolet or the ability to get a two-dimensional map of the entire magnetic field, besides its matchless resolution. The use of a stratospheric balloon allows it to work in similar conditions to those of satellites, avoiding image degradation caused by turbulences in the low layers of the terrestrial atmosphere, but at considerably lower cost and execution time. In addition, its circular path through the Arctic permits to avoid the day and night cycles and to observe the Sun uninterruptedly throughout the duration of the flight, as well as to generate energy constantly thanks to its solar panels.

The mission is the result of a collaboration between the German Space Agency DLR, the American NASA and the Spanish National Space Program.