CARMENES instrument, co-led by the Institute of Astrophysics of Andalusia (IAA-CSIC), has detected a giant planet around a dwarf star from the Observatory of Calar Alto (Almería)

The planet could have been formed by the rupture of the disk around the star, and not by the accumulation of gas around a solid nucleus, as it is believed that gas giants form

CARMENES instrument, which operates from the Calar Alto Observatory (Almería), has found a giant gas planet around the red dwarf star GJ3512, as well as indications of the presence of another. The finding, published in the journal Science, calls into question the most accepted model of formation of the giant planets, which states that they are born from a solid nucleus that accumulates gas, and opens up the possibility of their formation after the rupture into fragments of a protoplanetary disk.

“With this discovery, CARMENES achieves the first detection of an exoplanet using a new generation infrared precision instrument. We see that the infrared arm of CARMENES, developed at the Institute of Astrophysics of Andalusia (IAA-CSIC), has met its demanding requirements and shows a very high level of efficiency”, says Pedro J. Amado (IAA-CSIC), CARMENES co-principal investigator and participant in the finding.

CARMENES uses the radial velocity technique, which seeks tiny oscillations in the movement of the stars generated by the attraction of the planets that revolve around it. And it does so around red dwarf stars, smaller than the Sun, which offer the conditions for the existence of liquid water in nearby orbits and in which, unlike those of the solar type, the oscillations produced by terrestrial planets can be detected with current technology.

The astronomers of the CARMENES consortium observed that the speed of GJ3512 was changing very rapidly and constantly in the visible and infrared channels of the instrument, which pointed to a massive companion, something anomalous for this type of stars.

“It is becoming the norm to expect small planets around these small stars, so we initially thought this large motion had to be caused by another star in a very long orbital period –explains Juan Carlos Morales, a researcher at the Institute for Space Studies of Catalonia (IEEC) at the Institute of Space Sciences (ICE, CSIC) that heads the study–. We kept observing it, but on low priority. To our surprise, the motion started to repeat again in the next season, indicating that it was actually produced by a planet. At that point, GJ 3512 finally made it to the top priority list”.

“Photometric observations (from the two optical telescopes) at Sierra Nevada Observatory, as well as from the Montsec and Las Cumbres observatories, have allowed to determine GJ3512 rotational period and to confirm the presence of the planet, discarding stellar activity as the origin of the signal”, says Cristina Rodríguez-López, a researcher at the IAA-CSIC who participates in the study and director of the Sierra Nevada Observatory (OSN).

A PLANETARY SYSTEM DIFFICULT TO EXPLAIN

Until now, the so-called “core accretion model” for planet formation was considered sufficient to explain Jupiter and Saturn in our Solar System, and many other gas giant planets discovered around other stars.

The “core-accretion” model assumes that planets form in two phases: at first, rocky cores, the size of a few Earth masses, form a nucleus within the protoplanetary disk and then, when a critical mass is reached, they start to accumulate and retain large amounts of gas until they reach the mass of Jupiter or more. 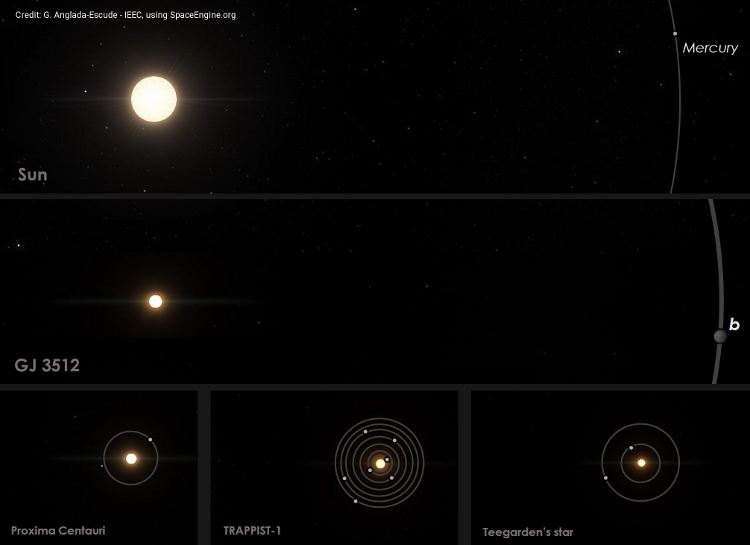 However, this model does not work for GJ3512. Dwarf stars show low mass discs, so that the amount of material available on the disk to form planets is also significantly reduced. The presence of a gas giant around a low mass star indicates that the original disk was abnormally massive, or that the dominant model does not apply in this case. In addition, this planet moves in an eccentric orbit, which is usually interpreted as the indication that, in the past, interaction with another massive planet produced an alteration of the orbit (this second planet would have been expelled from the system as a consequence).

The CARMENES consortium worked closely with several leading international groups in dynamics and planetary formation, but the most up-to-date models did not allow the formation of even one massive planet, let alone two.

Thus another possible planet formation scenario was considered: the "disk instability model", which defends that gas giants can be formed directly from the accumulation of gas and dust in the protoplanetary disk instead of requiring a "seed" core. A model that, until now, was only compatible with a small group of young, hot and very massive planets located long distances from their host star.

The finding around GJ3512 constitutes the first candidate for disk fragmentation around a low mass star, and also the first to be discovered by radial velocity measurements. "I find fascinating how a single anomalous observation has the potential to produce a paradigm shift in our thinking, in something as essential as the formation of planets and, therefore, in the big picture of how life came into existence", says Juan Carlos Morales (IEEC, ICE-CSIC). 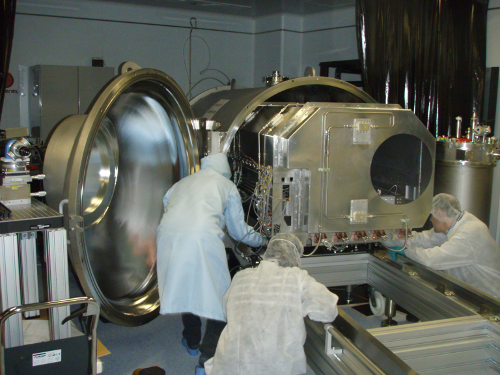 CARMENES is a unique instrument in the world, both in precision and in stability, essential qualities to measure the small variations of speed that planets produce in the stars: CARMENES detects variations of speed in the movement of stars located hundreds of billions of kilometers away with an accuracy of the order of one meter per second. To do this, it works in vacuum conditions and with temperatures controlled up to the thousandth degree. One of the great strengths of CARMENES is that it simultaneously observes the visible and infrared, which allows to avoid false positives in the detection of planets, common today due to the confusion of the signals of stellar activity and other physical mechanisms intrinsic to the star with the existence of planets. The simultaneous observation in the visible and infrared of CARMENES allows to discriminate between one signal and another and confirm the findings without the need for other checks.

CARMENES, operating in the 3.5 metre telescope at the Calar Alto Observatory (Almería), has been developed by a consortium of eleven German and Spanish institutions. In Spain participate the Institute of Astrophysics of Andalusia (IAA-CSIC), which coordinated the project and developed the infrared channel, the Institute of Ciències de l'Espai (IEEC-CSIC), the Universidad Complutense de Madrid, the Institute of Astrophysics of the Canary Islands (IAC) and the Center for Astrobiology (CAB, CSIC-INTA). It has obtained funding from the Max Planck Society (MPG), the Consejo Superior de Investigaciones Científicas (CSIC) and members of the CARMENES consortium, with contributions from the Spanish Ministry of Economy and Finance (MINECO), the states of Baden-Württemberg and Lower Saxony, the German Foundation for Science (DFG), the Klaus Tschira Foundation (KTS), the Regional Government of Andalusia and the European Union through the ERDF / ERF funds.