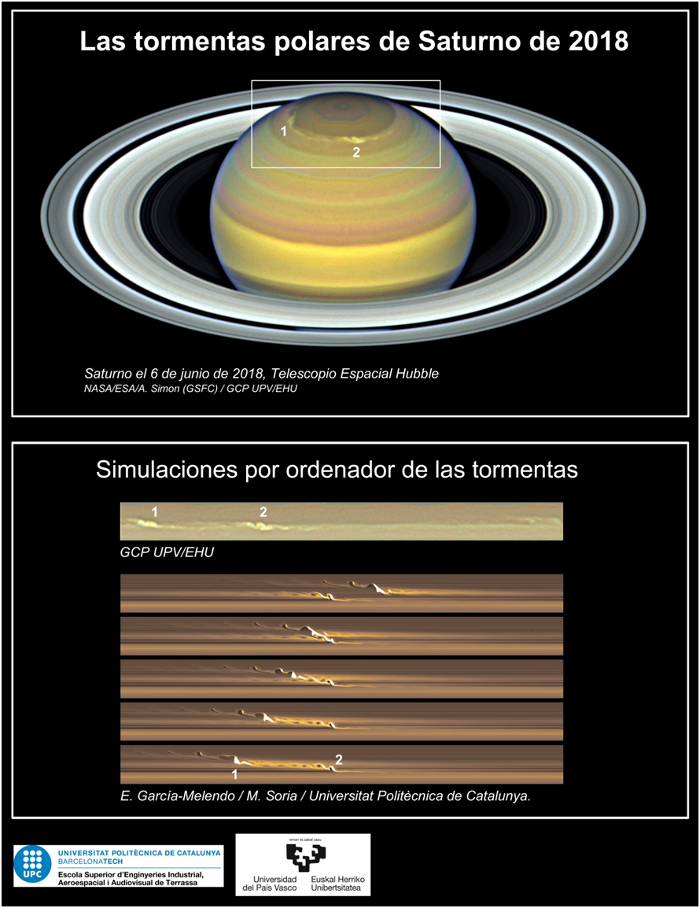 Astronomers from Bilbao (Basque Country) have coordinated the global follow-up of a series of storms, which developed in 2018 on the disk of the ‘lord of the rings’, using space- and ground-based observations, including data from Calar Alto.

With its enormous rings, Saturn is the most appealing of the giant gaseous planets. Like other planets with an atmosphere, it is a natural laboratory to study meteorological events happening in our planet and to test, under extreme conditions, models used to explain and predict them.

The dense Saturn atmosphere has been displaying, for nearly 150 years of systematic telescopic observations, spectacular meteorological phenomena. In particular, white spots, which are storms appearing typically every 30 years – time needed for Saturn to orbit the Sun -- of size and duration never seen on Earth.

On 29 March 2018, an amateur astronomer from Brazil detected with his small telescope a white spot close to Saturn’s north pole. The spot was quickly growing in size, reaching 4000 km in length in a few days, making it the most outstanding detail in the disk of the planet of the rings.

Professional observatories, including Calar Alto, in collaboration with expert amateurs, followed up the evolution of the storm, which multiplied, with a second spot appearing two months later to the north. In the following months, in a sequential manner, a third and a fourth spot appeared, even closer to the north pole, on the border of the famous Saturn hexagon, something never observed before.

The spots moved during all these months with different velocities, dragged by the atmospheric winds blowing in Saturn like jet streams to the east and to the west, whose intensity depend on the latitude. While the first spot, the southernmost one, was moving at ca. 220 km/hour towards the east, the northernmost spot was moving west at about 20 km/hour. This led to encounters between them, with spots nearly touching each other, generating mutual interactions, and atmospheric perturbations that propagated, surrounding the whole polar region in Saturn.

The Planetary Science Group at Basque Country University (UPV/EHU) lead by Prof. Agustín Sánchez-Lavega, in collaboration with professors of the Engineering School in the same city (Bilbao) as well as scientists from other countries, has published in the Nature Astronomy journal the results of the follow-up of this series of storms, of large dimensions and long duration, in Saturn in 2018.

The study was performed in the framework of a wide international collaboration including the Cassini spacecraft – which was orbiting the planet until September 2017 –, the Hubble space telescope, the PlanetCam instrument from UPV/EHU installed on the Calar Alto 2.2-m telescope, and a complete network of non-professional observers who provided images that permitted a daily follow-up of the evolution of the phenomenon.

Numerical simulations of these storms

The characteristics of the four spots of 2018 suggest that they are storms triggered by convection in the deep water clouds, around 200 km below the visible clouds.  The hot and wet gas goes up vigorously through the light Saturn hydrogen atmosphere, to form dense ammonia clouds that are the ones we see with a telescope.

“It is the first time we observe such a phenomenon of multiple storms at different latitudes. Previously we had seen only small isolated storms or the giant and rare great white spot”, points out Agustín Sánchez-Lavega. Curiously, the first storm arose inside a cyclonic whirlpool, from images previous to the discovery, obtained by the Cassini spacecraft months before its disintegration.

According to the models developed to simulate these storms, their energy is intermediate between the small and giant ones, but we do not know the mechanism able to generate them at different latitudes on the planet, and above all, how is it possible they survive for so long time. “On Earth, storms of this type last for some days at most, but in Saturn, the first of the spots remained active for more than seven months”, emphasizes Sánchez-Lavega.

Also, these new storms, as for the great white spot, have been observed only in the northern hemisphere (they were never seen in the southern one) and seem to follow a rhythm of formation every 30 or 60 years, time for the planet of the rings to turn around the Sun, on its slow orbit 10 times more distant than the Earth from our star.