Storms in Jupiter cause a cyclone to split

A group from the Basque Country University has followed-up for one year a series of convective storms inside a cyclone on Jupiter and, by means of simulations, found that storms of this size could only have been generated by water condensation.

In February 2018, a series of convective storms occurred on Jupiter. They were storms with strong vertical movements and great precipitation development that were so powerful that they completely changed the region where they took place: a cyclone 28,000 km long, called a ghost cyclone -- owing to its weak contrast which renders it difficult to make out in observations from the Earth, although it could be observed from Calar Alto.

“We found out about these storms thanks to observations made by amateur astronomers, who certainly provide us with a practically continuous monitoring of the meteorological activity of Jupiter,” said Peio Iñurrigarro-Rodriguez, member of the Planetary Sciences group of the Department of Applied Physics I at the UPV/EHU’s Faculty of Engineering - Bilbao, and one of the authors of the study in which these storms and their influence on the cyclone were observed analyzed and simulated.

The initial observations of this phenomenon were obtained from amateur astronomers and immediately caught the attention of the researchers. “It is not a very common phenomenon; storms tend to develop in cyclonic regions but not inside specific cyclones and that is what caught our attention, because we were interested in seeing how the storms interacted with the cyclone itself,” said Iñurrigarro. The storms remained active only for a few days but they were so powerful that they totally altered the structure of the cyclone and generated a huge amount of turbulence inside it, and even ended up splitting the cyclone into two structures. 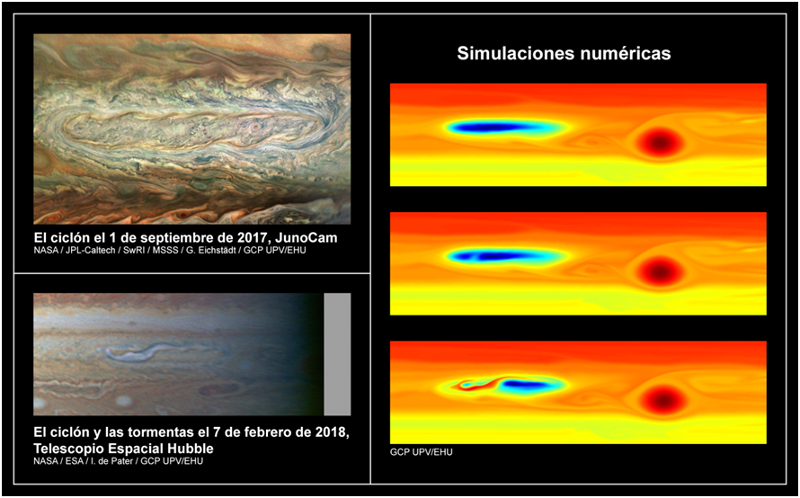 For the study, apart from the images taken by amateur astronomers they had others from various sources, such as the ones captured by the Hubble space telescope and the JunoCam camera of the Juno mission that is currently orbiting the planet Jupiter.

They also used observations made by members of the Planetary Sciences group themselves using the UPV/EHU’s PlanetCam, a high-resolution camera fitted to the 2.2-m telescope in Calar Alto, which they use to monitor the atmospheric activity of planets in the Solar System. “Each of the instruments takes the images using different filters, so the information we receive from each of them is complementary. What is more, in this case the activity taking place in the cyclone had to be monitored over several months,” explained the researcher.

While analyzing the numerous images obtained, they made numerical simulations both of the cyclone and of the perturbation the latter underwent as a result of the storms. To do this they used a numerical model of atmospheric circulation adapted to the characteristics of Jupiter’s atmosphere. One of the characteristics they wanted to determine through these simulations was the nature of the storms, in other words, how much energy was released by the storms and what the source of that energy was. In convective storms the movements produced are the result of the energy that is released in the condensation of various gases that go on to produce the expanding clouds observed.

“The most important candidates were ammonia, the main component of the planet’s visible clouds, and water, much deeper in the atmosphere and difficult to observe,” said Iñurrigarro. “The simulations enabled us to calculate the energy we needed to input into the simulated system to reproduce the phenomenon. And through that energy supplied to the atmospheric structures, we determined that the only possible source was water condensation because water condensation releases infinitely more energy than that of ammonia. So, merely through comparison, we saw that the amount of ammonia we would need to generate that energy supplied was impossible to obtain, because it would require collecting ammonia from an area very much bigger than that of the cyclone itself where the storm activity was taking place.”

“By contrast, with the water  a reasonable area was obtained because it is more powerful. Our simulations show that to reproduce the observations it is necessary for the storms to be more powerful and the detailed calculations enable us to determine that the storms that formed in the Ghost cyclone were convective ones formed by water condensation coming from at least 80 km below the visible clouds,” concluded the physicist.