Still, some galaxies show active ongoing star formation, while others are no more forming stars (but did so billions of years ago): the so-called current “star formation rate” varies from zero (quiescent galaxies) to hundreds of solar mass per year (Mʘ/yr) in starburst galaxies. For comparison, our Milky Way forms the equivalent of about 3 Mʘ/yr. The most extreme cases of starburst, distant galaxies (when the Universe was less than a billion years old after the Big Bang) were found to form nearly 3,000 Mʘ/yr.

The reasons for such “productive” or “sterile” galaxies are multiple. They can be due to internal or/and external factors. Indeed, most galaxies are not isolated in the Universe and they do suffer from the influence of other neighbor galaxies, from fly-by to fully merging encounters. Our own Galaxy is the product of various minor mergers with smaller companions, likely former satellites. The effects of such gravitational interactions between neighbor galaxies on the way they form stars is a hot topic in modern astrophysics.

A group of astronomers from the University of Guanajuato (Mexico) and from the CALIFA survey collaboration have studied the effects of gravitational perturbations on the star formation rate in a subsample of CALIFA galaxies in the Local Universe. The CALIFA project observed about 600 nearby galaxies with the PMAS integral-field spectrograph at the 3.5m telescope of Calar Alto, to study among many other things, how galaxies form(ed) the stars, from their center to their outskirts. The kinematics of all CALIFA galaxies was also studied in detail, so one may quantify the gravitational perturbations at play in a given galaxy of the sample.

Ongoing and recent star formation in a galaxy can be seen through the Ha emission line of the ionized hydrogen.  As an integral field, sensitive spectrograph, PMAS is able to detect and to spatially resolve faint Ha emission in a galaxy, down to low star formation rates of a fraction of solar mass per year and per surface unit (Mʘ/yr per square kiloparsec, or about 10 million square light-years).

In addition, PMAS resolves over 250 regions on every galaxy it is pointed to, covering the full extension of all CALIFA galaxies, that were chosen to fit well inside the PMAS field of view of one square arcminute, in its PPAK fiber bundle mode. This is about 1/800th of the apparent surface of the Full Moon on the sky. Despite it sounds like quite a narrow field of view, thousands of galaxies in the local Universe present apparent sizes around and below an arcminute and can thus be fully studied with PMAS.

The authors of this new paper based on a CALIFA subsample, led by Abdías Morales-Vargas, found that regions hosting recent star formation in perturbed galaxies follow a different star formation rate vs. stellar mass relation, compared to non-perturbed ones. As a good tracer of the star formation rate, the Ha emission was observed over those 250 areas covering each CALIFA galaxy, arranged in the PMAS/PPAK hexagonal-shaped field of view, as visible in the reconstructed image of the perturbed galaxy NGC 7625. In the collage, one can see the Ha emission map (to the right) covering the same field of view than the real image of the object (to the left): the ionized hydrogen emission is clearly stronger toward the inner parts of NGC 7625. 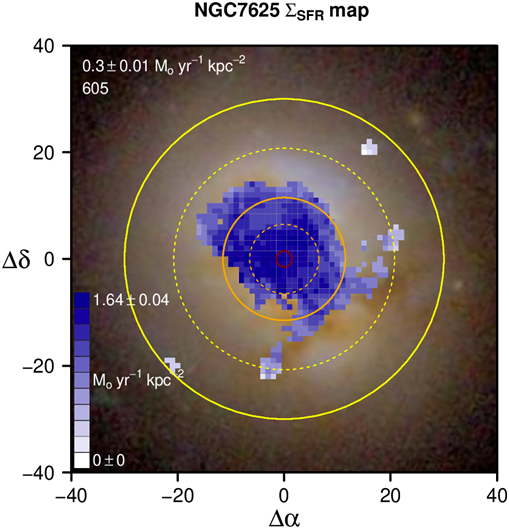 The map of the annual star formation rate per surface unit (∑SFR) in NGC 7625 on the left also shows that stars form mainly at the center of the galaxy: deep blue pixels in the nucleus represent regions forming over 1 Mʘ/yr/kpc² (inside the orange dashed circle). Light blue pixels (until the dashed yellow circle) trace moderate star formation – note the peculiar (perpendicular) bar-like feature South-West of the galaxy center. While the opposite pair of nearly white pixel clumps (close to the yellow circle) shows that very weak star formation is still ongoing in external areas of NGC 7625.

Moreover, perturbed galaxies show a relation between the integrated star forming properties and the perturbation parameter -- this parameter estimates the gravitational force exerted at a given point of a galaxy due to the presence of a companion galaxy, and the internal force due to the host galaxy at this point. This correlation could be mostly due to encounters with nearby galaxies, more than to a depletion of the star formation rate. That is, star formation properties could depend on the gravitational effect of companion galaxies. Morales-Vargas confirms that “gravitational perturbations do regulate the star formation, too.”

CALIFA targets are lying in all environments, from isolated galaxies to high-density regions of the Universe that is, groups and clusters. In these latter, they are naturally more likely to suffer perturbations by present and past neighbors. To have a more complete control sample of really unperturbed galaxies, one would need to target fully isolated ones, including at cosmological scales. Observing such lonely galaxies in voids, the lowest density environments of the Universe, will be the subject of another large survey with PMAS about to start at Calar Alto: the Calar Alto Void Integral-field Treasury surveY (CAVITY).

This will allow us to compare how ”Nature vs. Nurture” influences star formation, as well as to study many other aspects in the formation and evolution of galaxies, bricks of the universe at large scale. On January 1st, 2021, CAVITY and two other large observing programs, KOBE and LEGACY+ (both looking for exoplanets around nearby dwarf stars, with the CARMENES instrument), begin on the 3.5-meter telescope. We simply wish the three new surveys to provide, in the years to come, the same legacy value as CALIFA for the scientific community worldwide.