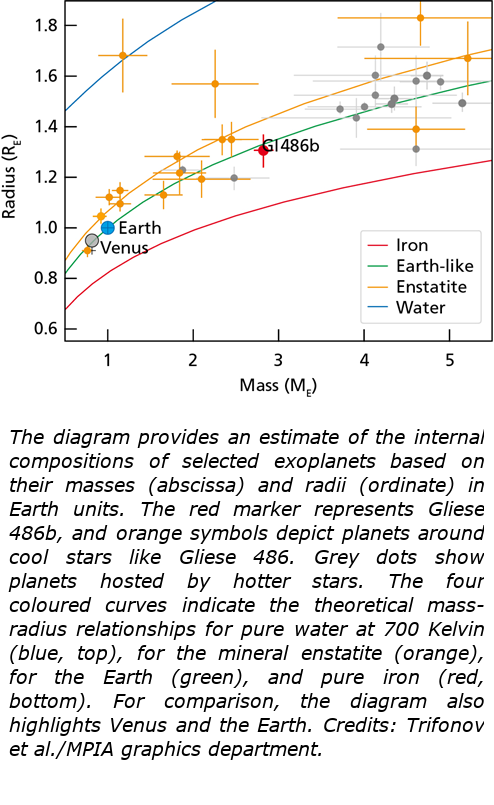 By combining different observing techniques, scientists have determined planetary masses, sizes, and even bulk densities, allowing them to estimate their internal composition. The next goal is to fully characterize those exoplanets similar to Earth by studying their atmospheres. However, probing the atmospheres of rocky planets with the currently available instrumentation is very challenging at best. This is the reason why available atmospheric models for rocky planets cannot be tested yet.

In this framework, astronomers from the CARMENES (Calar Alto high- Resolution search for M dwarfs with Exoearths with Near-infrared and optical Échelle Spectrographs) consortium published on March 5th, 2021, in the Science journal, a remarkable finding. Trifon Trifonov (from the Max Planck Institute for Astronomy in Heidelberg, Germany) and collaborators detected of a hot rocky super-Earth orbiting the nearby red dwarf star Gliese 486, located only 26 light-years. This planet also remarkably transits that is, partially eclipse its host star. For this finding, scientists have used techniques combining transit photometry and spectroscopy for radial velocities, in particular CARMENES spectra.

The newly discovered planet designated Gliese 486b is a super-Earth with a mass 2.8 times that of our home planet. It is also 30% bigger than Earth. By calculating the planet’s mean density from the mass and radius measurements, its composition appears similar to Venus and Earth, including a metallic core. An astronaut standing on Gliese 486b would feel a gravitational pull that is 70% stronger than what we experience on our world.

Gliese 486b revolves around its red dwarf star on a circular trajectory in only 1.5 days and at a distance of 2.5 million kilometers (60 times less than the Earth-Sun distance). Despite its close separation from the parent star, the planet designated Gliese 486b possibly has retained a part of its original atmosphere. Above all, as seen from Earth, we have the chance to see this exoplanet transiting that is, passing in front of its star, like a min-eclipse. For this reason, Gliese 486b is the ideal candidate to scrutinize its atmosphere and internal structure with the next generation of spatial and ground-based telescopes.

“The proximity of this exoplanet is exciting because it will be possible to study it in more detail with powerful telescopes such as the upcoming James Webb Space Telescope and the European Extremely Large Telescope in construction,” Trifon Trifonov explains. Especially for rocky planets like Earth, any such atmosphere consists of a thin layer, if it exists at all. As a result, many current atmospheric models of rocky planets remain untested Planetary atmospheres must meet specific prerequisites to observe them with next-generation observatories.

One rotation of Gliese 486b takes the same amount of time than its revolution around its red dwarf, so one side always faces the star. Although the star Gliese 486 is much fainter (a third of the mass and solar radius) and 2400°C cooler than the Sun, the irradiation is so intense that the planet’s surface heats up to at least 700 Kelvin (approx. 430 °C). In this sense, Gliese 486b’s surface probably looks more like Venus than Earth, with a hot and dry landscape interspersed with glowing lava rivers.

However, unlike Venus, Gliese 486b possibly only has a tenuous atmosphere, if any. Model calculations may be consistent with both scenarios because stellar irradiation tends to evaporate atmospheres. At the same time, the planet’s gravity helps to retain it. Figuring out the balance of those contributions is difficult and only the observation with the next generation of giant ground-based or spatial telescopes could characterize the atmosphere, if any, of Gliese 486b. 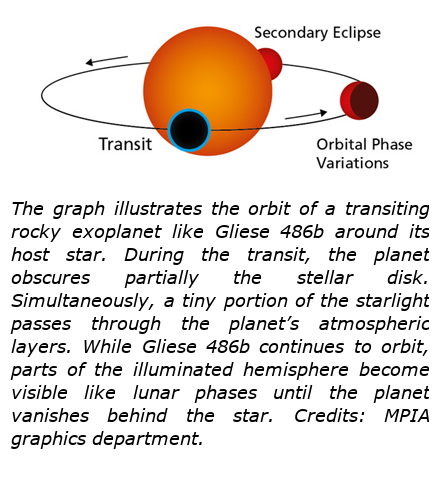 “The discovery of Gliese 486b was a stroke of luck. A hundred degrees hotter and the planet’s entire surface would be lava. Its atmosphere would consist of vaporized rocks” emphasizes José A. Caballero of the Center for Astrobiology (CSIC-INTA, Spain) and co-author of the paper. “On the other hand, if Gliese 486b were a hundred degrees colder, it would have been unsuitable for follow-up observations.” concludes Caballero.

Both Trifonov and Caballero collaborate in the CARMENES project, whose consortium comprises eleven research institutions in Spain and Germany. Its purpose is to monitor some 350 red dwarf stars for signs of low-mass planets using the dedicated spectrograph mounted at the 3.5-meter telescope at (Spain), the largest of its kind in European mainland.

The future measurements that the CARMENES team have in mind exploit the peculiar orbital orientation, which causes Gliese 486b to cross the surface of the host star from our point of view, creating a partial eclipse. Whenever this so-called transit happens, a tiny fraction of the stellar light shines through the thin atmospheric layer before it reaches Earth. The various compounds absorb light at specific wavelengths, leaving their footprint in the signal. By using spectrographs like CARMENES, the astronomers split up the light according to wavelengths and look for absorption features to derive the atmospheric composition and dynamics. This method is also known as transit (or transmission) spectroscopy.

A second spectroscopic measurement, called emission spectroscopy, is planned when parts of the illuminated hemisphere become visible like lunar phases during Gliese 486b’s orbit until it vanishes behind the star. The spectrum contains information on the bright, hot planetary surface.

“We can hardly wait for the new telescopes to become available,” Trifonov admits. “The results will help us to understand how well rocky planets can hold their atmospheres, what they are made of and how they influence the energy distribution on the planets.”

Meanwhile, the 3.5 m telescope at Calar Alto will keeping pointing, under the best sky in Europe and around 200 nights a year, hundreds of red dwarf stars (CARMENES-LEGACY+ project) and orange dwarf stars (KOBE project), to detect around them new worlds orbiting, some of them possibly in the habitable zone.