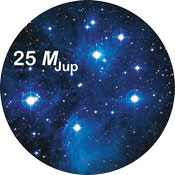 Open star cluster M45, the Pleiades, is popularly known as "The Seven Sisters". However, it is well-known that this group of young and nearby stars is composed not by just seven stars, but by about one thousand of them. A recent study of this cluster has discovered the faintest and coolest known members known to date: they are the Pleiades' lesser sisters, a group of the low-mass objects known as brown dwarfs.

Nomal stars, as our Sun, are bright because they are massive enough to induce the high pressures and temperatures in their cores necessary to ignite the thermonuclear reactions that release the energy that reaches us in the form of light and heat. The most massive stars can have masses surpassing one hundred times that of the Sun while the least massive stars have masses of about one tenth of a solar mass. Objects less  massive than about one tenth of a solar mass are not able to heat and compress their interiors just enough to unchain this kind of nuclear reactions. They are "failed stars" and constitute the class of substellar objects known as brown dwarfs. They emit very low levels of radiation, due not to nuclear fusion, but to gravitational contraction.

The first free-floating brown dwarfs were discovered by a team leaded by the Spanish astronomer Rafael Rebolo in 1995, and they were found precisely among the members of the Pleiades star cluster in a research that was also partly based on observations done at Calar Alto. Rebolo's team has been since then very successful in discovering and investigating the nature of brown dwarfs and now report the discovery of the faintest and coolest known members of this cluster. In a recent study (Bihain et al. 2006) they publish their finding of at least six very low-mass brown dwarfs, with masses as small as 25 times the mass of planet Jupiter.

Stars in the Pleiades are normally used as references to check theories on stellar evolution. In a similar way, and according to Gabriel Bihain, first author of this study, "these sub-stellar objects will serve as references for theories" on the formation and evolution of  brown dwarfs.  In fact, Bihain adds, "Our study indicates an inconsistency between theoretical predictions and the photometric properties observed."

The Pleiades' lesser sisters were identified, firstly, thanks to their infrared emission, which is high when compared to the radiation they produce in visible wavelengths. Then, their membership in the Pleiades star cluster was confirmed by checking that they move in space in the same direction and with the same velocity as the rest of the stellar group. To deduce this motion, recent images were compared to other images obtained by the same research team more than eight years ago.

This research will not stop here. As Bihain says, "we need a complete analysis of the motion of Pleiades members, covering the entire range of masses from stellar to sub-stellar". He also emphasizes that "the existence of low-mass brown dwarfs points to the possible presence of free-floating objects of planetary mass. These could be detected and studied with the telescopes available today".

This discovery was based on observations made at Calar Alto Observatory, with the instruments Omega-Prime and Omega-2000, attached to the 3.5 m telescope.  The study, that also makes use of observational data obtained at other observatories, was done by scientists from the Spanish insitutions Instituto de Astrofísica de Canarias, GTC Project and Consejo Superior de Investigaciones Científicas, and from the German Max-Planck-Institut für Astronomie .

The open cluster M45, the Pleiades, is a cluster of young stars in the constellation Taurus, at a distance of 437 light-years (134 parsecs) and has an age of around 120 million years. In astronomical terms these stars are very young if we consider that our Sun, a middle-age star, is more than 40 times older. The brighter members of the Pleiades can be easily seen with the naked eye in winter nights from the northern hemisphere.