Calar Alto: Darkness in the Infrared

Modern astronomy relies not only on visible light. Current technology allows astronomers to study the universe also through the emission that celestial bodies send towards us also in invisible regions of the electromagnetic spectrum, such as ultraviolet light, infrared, and radio radiation.

The rainbow displays the whole set of colours of visible light: short (violet, blue), medium (green, yellow) and long (orange, red) wavelengths can be mixed up to produce white light. But the stars emit "light" with wavelengths even longer than those corresponding to red colour. This light, "redder than red", is usually known as infrared radiation. It cannot be seen with our eyes, but modern detectors and cameras can capture it. The study of infrared radiation coming from space offers a wealth of information about star birth, remote galaxies, the structure of the universe and many other fascinating problems of contemporary astrophysics.

For this reason, many state-of-the-art astronomical facilities devote a good part of their time and technology to the study of the universe in the infrared part of the spectrum, and having a sky of good infrared quality is mandatory for this.

An exhaustive study analysing the quality of the sky at Calar Alto Observatory in the infrared has been published recently. This scientific work extends, complements and confirms a previous one centred on visible light. The data used were taken with two of the telescopes of Calar Alto Observatory and two different infrared cameras, during the last four years. This has allowed a throughout analysis of the sky brightness in three different infrared "colours" (or "bands": J, H and K), assessing the sky quality and seasonal variations on the basis of a statistically significant and high-quality data set. A good fraction of the sky brightness measurements were performed on images obtained in the frame of one of the most outstanding scientific projects being carried out at Calar Alto: the ALHAMBRA survey. 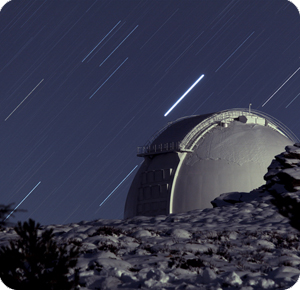 The authors of this work, leaded by Sebastián Sánchez, conclude that "Calar Alto is as dark in the near-infrared as most of the other astronomical sites in the world with which we could compare it." Even more, for the J and H bands, "Calar Alto can be quoted among the darkest astronomical sites in the world", and for the K band "its sky brightness is clearly comparable with most astronomical sites, apart from Mauna Kea." One more result refers to the instrumental contribution to the infrared background in the K band, that is shown to be really low compared to the natural sky brightness.

The article also refers to the air turbulence and its impact on the sharpness of astronomical images (what is usually called the "seeing"). The authors conclude that the contribution of domes, telescopes and instruments to the degradation of the image quality is only around a 10%, meaning that the instruments take good profit from the intrinsically good natural conditions at the mountain.

Finally, the study evaluates the fraction of the time that is useful for astronomical observations, reaching conclusions fully compatible with the previous study, implying that at Calar Alto approximately 70% of the time can be used for scientific work.

Calar Alto Observatory, with its set of telescopes and ancillary facilities, remains the most important astronomical resource in the European continent. The authors of this study conclude that "this observatory is a good candidate for the location of future large aperture optical/near-infrared telescopes".