The Oldest Brown Dwarf: The Coolest and Oldest Objects in the Galaxy Measured from Calar Alto 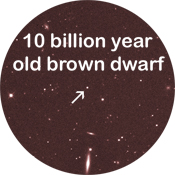 Spiral galaxies as our own are made up from several structural components. Their most outstanding part is a flat disc where stars and gas trace graceful spiral arms. In the centre of the disc we find the bulge, a dense and round accumulation of stars. And all this is surrounded by a spherical halo very difficult to perceive, due to its low stellar density. The Sun is a normal member of the disk of our Galaxy. This disk, seen edge-on from our planet, draws on the sky the shiny shape of the Milky Way, a tenuous ring of light that embraces all the celestial sphere. The Milky Way can be better seen in moonless summer and winter nights from dark places.

The halo of our Galaxy contains the oldest stars in our home stellar system. These stars are characterised for having considerably fewer metals (in astronomers parlance metals are elements heavier than hydrogen and helium) than our Sun and, also, than most of the stars that populate the Galactic disk. Stars in the Galactic halo represent the second generation of stars formed in our universe, so they are witnesses of a time more than 10 billion years ago, long before our own Solar System had formed. Although we are placed in the Galactic disk, stars from the halo cross the disk (usually at high velocities) and a certain number of them can be found in our immediate neighbourhood.

Most of the halo stars previously known are members of stellar aggregates called globular clusters. Recently, however, large deep sky surveys have improved our knowledge on old halo stars living outside those clusters. Halo stars with masses from 10 times to only a few tenths of the mass of our Sun have been detected, proving that the product of star formation 10 billion years ago was not substantially different from the product of ongoing star formation in the Galaxy.

But what about the least massive and coolest stars, those at the border of the brown dwarf regime? And, was the universe producing brown dwarfs, or "failed stars", 10 billion years ago, when it had only one fifth of its current age? 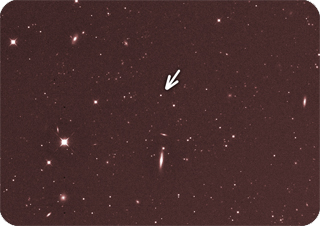 Very low-mass stars and brown dwarfs are not easy to detect in the first place because they are extremely faint at optical wavelengths, and they can only be seen in infra-red light. We know today hundreds of younger brown dwarfs living in the Galactic disk, all of them found and confirmed during the last decade, but only a handful of "candidates" from the oldest halo population could be spotted. How to determine if these "candidates" are indeed sub-stellar halo objects?

Elena Schilbach and Siegfried Roeser from the Centre for Astronomy of the University of Heidelberg, and Ralf-Dieter Scholz of the Astrophysical Institute Potsdam, observed these "candidates" with the infra-red OMEGA2000 Camera at the 3.5 m telescope of Calar Alto Observatory, Spain. The goal of these observations was the direct measurement of the distances of these stars from our Sun, since accurate distances are crucial for the determination of the absolute stellar energy output.

In order to make the distance measurements, all the "candidates" had to be observed regularly over several years. The method is called trigonometric parallax measurement. The Earth moves around the Sun. This induces a slight change in the point of view from which we look at the sky from our planet. For this reason, all stars seem to follow an elliptical path every year on the sky relative to the far-away galaxies of the universe.

What seems easy, is quite challenging in reality. The farther away a star is, the smaller is the ellipse. Even the nearest stars show an ellipse with a large axis of less than an arc-second, corresponding to 1/1800 of the diameter of the full Moon. To reveal the nature of these "candidates" without doubt, Elena Schilbach and her co-workers had to measure with an accuracy about 1000 times better, an accuracy which equals the size of a man on the Moon seen from the Earth.

With the assistance of the Calar Alto crew, each target was observed on average 20 times over 3.5 years, and the complex data reduction finally led to clear results. According to the authors of this research, "for the first time trigonometric parallaxes and absolute luminosities of stars, both metal-poor and low-mass, have been obtained." Six of their targets, out of ten, really exhibit their low-metallicity nature, i.e. they contain only 1/30 of the metal abundance of our Sun, and the remaining 4 stars about 1/3 each. The observed absolute energy output and the colour of the targets are fully consistent with theoretical predictions for metal-poor objects. Moreover, one target among the lowest metallicity candidates, the halo object 2MASS 1626+3925, is so faint that it has to be a brown dwarf, the oldest brown dwarf found in our Galaxy so far.

This has been a very innovative work. In Schilbach's words, "never before were trigonometric parallaxes measured in the infra-red directly with respect to galaxies." No doubt this research will proceed and new exciting results will arise from it in a near future.

Press release from the Astrophysical Institut Potsdam (in German)

The oldest brown dwarf known in the Galaxy (signed with an arrow) registered in an infra-red image obtained with the camera Omega 2000 attached to the 3.5 m telescope of Calar Alto. (4.66 Mb)