New light on the Trifid Nebula, a star nursery as old as Homo sapiens

The Trifid Nebula is a well-known complex of young stars, some of them still hidden in the cloud of gas and dust from which they were born.

A new study, using data from the Calar Alto Observatory, sheds new light on this intricate stellar nursery of multi-epoch star formation in the last 300,000 years.

The Trifid Nebula, discovered in 1764, is visible with small telescopes as a diffuse patch of light towards the constellation of Sagittarius, in the densest regions of the Milky Way. It includes a group of thousands of very young stars embedded in a nebula, a mixture of gas and dust particles, which constitutes the deposit of material to form future stars.

Its name refers to its most striking visual feature: a nebula divided into three lobes by dark clouds of dense molecular material. New infrared observations, which allow us to see through the dust, reveal a complex area of ongoing star formation in its darkest parts, which began about 300,000 years ago, the age of Homo sapiens. 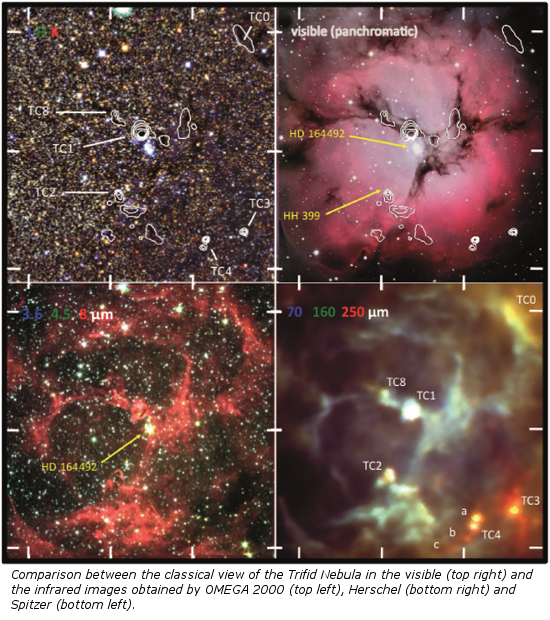 A team of astronomers based in Mexico, Italy and Spain observed the central regions of the Trifid Nebula with the OMEGA 2000 camera, mounted on the 3.5-meter telescope of the Calar Alto Observatory, and compared its data in the near-infrared with "redder" images taken from space (the Earth's atmosphere is opaque in the medium and far infrared), which allow us to see the dustiest and coldest universe.

"The OMEGA 2000 camera is undoubtedly one of the best instruments in the near infrared of the Northern Hemisphere," says Carlos Román-Zuñiga, an astronomer at Universidad Nacional Autonoma de Mexico (UNAM Ensenada) and one of the co-authors of the study. The quality and uniformity of the image combined with the skies of Calar Alto provide excellent quality data in a generous field of view, ideal for studying nearby regions of star formation such as the Trifid Nebula.

The Calar Alto images are quite deep, which helps performing a meaningful comparison with those from the Herschel (ESA) and Spitzer (NASA) satellites. "In addition to the deep high-resolution images of OMEGA 2000, we analyzed the most recent far-infrared data from the Herschel space telescope to review the parameters of the densest nuclei in the Trifid", says Mauricio Tapia (UNAM Ensenada), lead author of the study.

Combining the Calar Alto with the satellite data, researchers have been able to scrutinize eight globules - or Trifid Condensations, TCs - suspected of harboring stars in formation, still hidden behind the dense clouds of dust and cold gas where they form. And indeed, they have found young stellar objects in seven of the eight globules: they are newborn stars that can emit overall as much light as 100 to 500 suns. 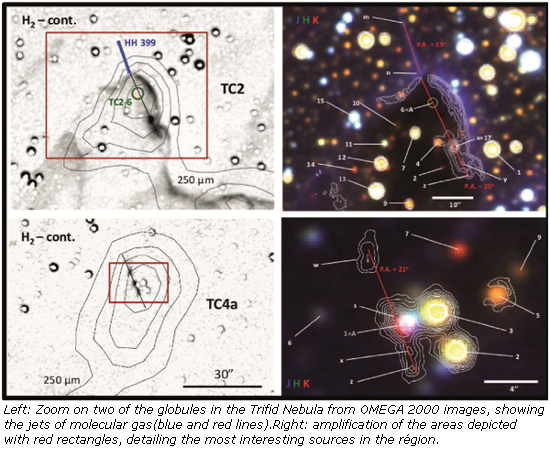 Spectacular phenomena related to stellar formation processes have also been detected, such as jets of gas that emerge from both poles of these young stars and that create knots probably due to shocks with denser material. "These flows and jets have been created and driven by intermediate mass stars recently formed in the densest globules of the nebula", adds Mauricio Tapia.

In general, this study confirms the Trifid Nebula to be a region of massive star formation in a filamentary and turbulent molecular cloud, whose formation began about 300,000 years ago and which still continues to produce low and intermediate mass stars. The star formation is concentrated on the edges of the expanding ionized region produced by the radiation (mainly ultraviolet) of the giant star HD164492. "Our study allows us to understand and quantify how the formation of the youngest generation of stars in the complex takes place," concludes Carlos Román-Zuñiga.

An additional result of this study provides a distance for the Trifid Nebula almost 20% greater than previously estimated: the complex is about 6,500 light years from us to the Sagittarius arm of our galaxy.