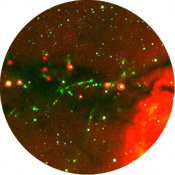 New stars are born when the gaseous material of interstellar nebulae gets concentrated under the rip of gravitational attraction. The process of star formation implies a complete set of violent, specific phenomena that usually happen hidden behind the absorbing nebular material. However, modern observation techniques with infrared light are able to penetrate into those turbulent and dark regions where young stars are born. This way it is possible to study some of the energetic and violent processes involved in star formation.

The ejection of violent bipolar jets is one of the most astonishing manifestations of the formation of new stars. The jets are believed to be formed at the region where the new star interacts with its surrounding circumstellar disk, a region where particularly energetic processes develop due to the concurrence of accretion and rotation within an intense magnetic field. Such proto-stellar jets are highly supersonic, and they drive strong bow shocks across the interstellar medium in which they propagate. Shock waves compress and heat the gas, and this makes the abundant hydrogen molecules to emit infrared light. 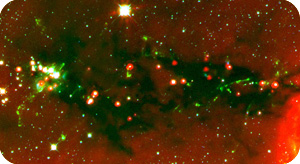 The image displays an amazing cluster of jets coming from young stars embedded in a dark nebular filament in Cygnus constellation. This structure has been recently discovered with the Zeiss 3.5 m telescope at Calar Alto Observatory. These many proto-stellar jets, observed thanks to the radiation emitted by shocked hydrogen (seen here in green), are driven by extremely young stars (appearing red) which are submerged inside a dark filamentary molecular cloud. This is a beautiful demonstration of how a group of young stars formed simultaneously produce a cluster of bipolar jets.

The image is a three-colour composition using K-band (blue) and H2 narrow-band (green), both obtained at Calar Alto Observatory, and an 8-micron image (red) taken with the Spitzer Space Telescope. The observations at Calar Alto were carried out by R. Bachiller (OAN, Madrid), N. Kumar, J. Grave, and G. Texeira (CAUP, Porto) in July 2011. They used the Zeiss 3.5 m telescope equipped with the high sensitivity near-infrared camera Omega 2000.