The massive cluster in front of the Orion Nebula 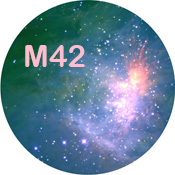 The Orion nebula (also known as M42) is one of the great wonders of the night sky. Its discovery goes back 400 years, when it first appeared described as "fog" in the observing logs of French astronomer Nicolas-Claude Fabri de Peiresc (1610). The discovery of the Orion nebula is intimately associated with the early developments of the telescope, but only in the last 60 years have we come to realize the true astrophysical importance of this glamorous object: the nebula, like so many in our Galaxy and in other galaxies, is a nursery of baby stars. Inside the Orion nebula astronomers have found a wide range of young stellar and stellar-like objects, from massive ionizing stars tens of times more massive than the Sun, down to objects known as brown dwarfs, which are not massive enough to burn hydrogen and become true stars. Of all the massive nurseries in our Galaxy, the Orion nebula is the closest to Earth. This makes this region special, offering astronomers the best chance to understand how nature transforms clouds of very diffuse gas into hydrogen burning suns, failed stars, and eventually planets.

Not surprisingly, astronomers see the Orion nebula as the benchmark for star formation studies, the golden standard, and most of the established measurements of how stars form have been derived from this important region, like, for example, the distribution of stellar and brown dwarfs masses at birth, their relative ages, their spatial distribution, and the properties of the planet forming circumstellar disks surrounding the young stars in the Orion nebula.

But reality is a bit more complicated. Recent observations of the Orion nebula, made at Calar Alto Observatory (CAHA), with the Canada-France-Hawaii Telescope (CHFT) and the Sloan Digital Sky Survey (SDSS) by H. Bouy (CAB) and J. Alves (Univ. of Vienna) revealed that there is a second massive cluster of slightly older stars in front of the nebula. Although astronomers knew of the presence of a foreground stellar population since the 1960's, the observations revealed that this population is more massive than first thought, and it is not uniformly distributed, but clusters around the naked-eye star, iota Orionis, or the southernmost tip of Orion's sword. The importance of this discovery is twofold: first, the new identified cluster is only a slightly older sibling of the Trapezium cluster at the heart of the Orion nebula, and second, what astronomers have been calling the Orion nebula cluster is, instead, a complicated mix of these two clusters, plus unrelated foreground stars.

Hervé Bouy, from CAB-CSIC (Madrid) and one of the authors of this work explains that "we need to fine tune what we thought were the most robust star and cluster formation observables”. He points out the need for a long follow-up work where “we must untangle these two mixed populations, star by star, if we are to understand the region, and star formation in clusters, and even the early stages of planet formation.”

"For me the most intriguing mystery is that the older sibling, the iota Orionis cluster, is so close to its younger sister still forming inside the Orion nebula" says João Alves for the University of Vienna. "It's hard to see how these new observations fit into any existing theoretical model of cluster formation, and that is exciting because it suggests we have been missing something fundamental. Clusters are very likely the favourite mode of star formation in the Universe, but we are still far from understanding why that is exactly.”

The Orion constellation with the footprints of the observations overplotted. The Calar Alto 1.23m images nicely complemented the other datasets in the vicinity of bright massive stars, and were key to the success of this study. Credit for the background photograph: Rogelio Bernal Andreo.(1.8 MB.)

Density of stars in front of the cloud. The shaded area represents the thinnest part of the molecular cloud. A clustering is clearly visible centred on iota Orionis. Credit for the photograph: Jon Christensen.