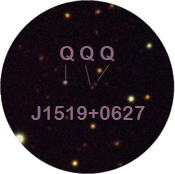 Quasars are the most energetic objects in the universe. They belong to the wider class of active nuclei of galaxies. In a quasar, the supermassive black hole placed at the centre of a galaxy engulfs material from its surroundings, and the process unleashes amounts of energy that make these monsters to be visible over cosmological distances.

Looking far in space means seeing the remote past, because the light coming from those objects needed a lot of time to reach us. So, when studying remote quasars we are sounding the conditions and processes that ruled in the ancient universe. Modern astrophysics considers galaxy mergers and interactions as a major route to galaxy formation. Not every distant galaxy displays an active nucleus but, if three physically distinct such objects would be found, this would represent a key observational test of this evolutionary scenario. The analysis of such a process would shed light on the mechanisms regulating quasar activity and the co-evolution of supermassive black holes within their host galaxies.

A physical system of three quasars has just been discovered, QQQ J1519+0627, the second of this kind up to date. The finding has been performed in the course of a systematic search for such quasar groupings. In words of Emanuele Farina, leader of this research: “We estimate that these systems are extremely rare in terms of simple accidental superposition.” Effectively, the number of quasars confirmed up to now would have to be multiplied by more than one thousand in order to have some reasonable chance of finding just one of these random groupings. Farina states that “we estimate that the probability to find a random group of three quasars is one out of one billion.” So, the components of triple quasars have to have some physical relation among them.

But this may be due to the relativistic effect of gravitational lensing. It is well known that a very massive object, such as a huge galaxy or a cluster of galaxies, can behave as a kind of lens that bends, amplifies or even replicates the images of fainter and more distant, background objects. The research team has taken this possibility very seriously and they conclude: “Thanks to the depth of our observations we can rule out the lensing scenario for these systems, and we conclude that QQQ J1519+0627 is not a case of gravitational lens.”

At the end, the only interpretation compatible with the data is that the components of this triple quasar are the active nuclei of three old and distant galaxies caught in the act of interacting, maybe merging, at a distance of some 9300 million light-years. The deep study of this case, and of others that may arise as this research program will advance, will be very useful to understand how nuclear activity is triggered by close interaction among galaxies, to constrain the dynamics of such systems and to characterize their environment and the processes that led to the formation of massive galaxies billions of years ago.

The study, performed by Emanuele Farina, Carmen Montuori, Roberto Decarli and Michele Fumagalli, has been possible combining data from the Sloan Digital Sky Survey (SDSS), the New Technology Telescope of ESO at La Silla (Chile) and from the Omega 2000 infrared camera attached to the 3.5 m Zeiss reflector at Calar Alto Observatory (Spain), that no doubt will be available in the near future to contribute with more and better data to this research program.

Field of view of one arcminute (the apparent size of a 1 euro coin seen from a distance of 80 meters) around the triple quasar QQQ J1519+0627, as imaged in the infrared at Calar Alto. Blue diamonds mark the quasar components. Thirteen sources identified as galaxies are shown as red squares, and nine stars as green circles.

Colour image of the quasar triplet combined from Omega 2000 H and z band shots, and SDSS r band data. The right panel identifies the three components of the triple quasar QQQ J1519+0627 (in this colour code, they appear as blue objects).